I'm joining in with the Seasonal Photo Scavenger Hunt hosted by Mary-Lou over at  Patio Postcards.

My sister Deanna and I had a girls trip to a yoga/meditation retreat center high up in the Blue Ridge Mountains in Boone N.C. from July 12-16.  Deanna was taking a Reiki Certification class.  I had signed up for a yoga and meditation retreat called "Essence of the Heart."  I challenged myself to try to get ALL of the photos on the SPSH list during this trip and here's what happened... 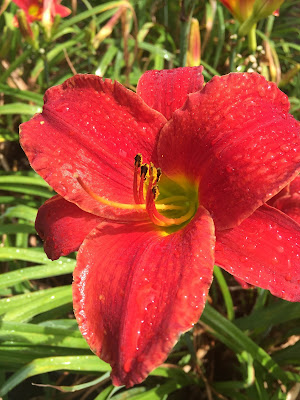 1. The rosiness of red was snapped in my own front yard.  And I didn't see any great "red" to photograph during the trip. 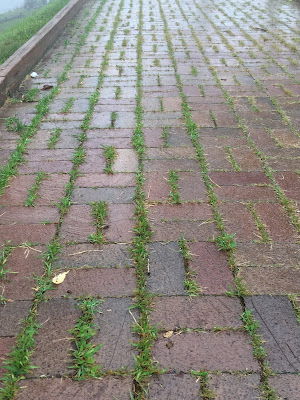 2. Stripes.  Our first morning at the retreat center was drizzly and overcast.  But it made for some fantastic shots.  And I was honestly giggling to myself when I took this one for "stripes." 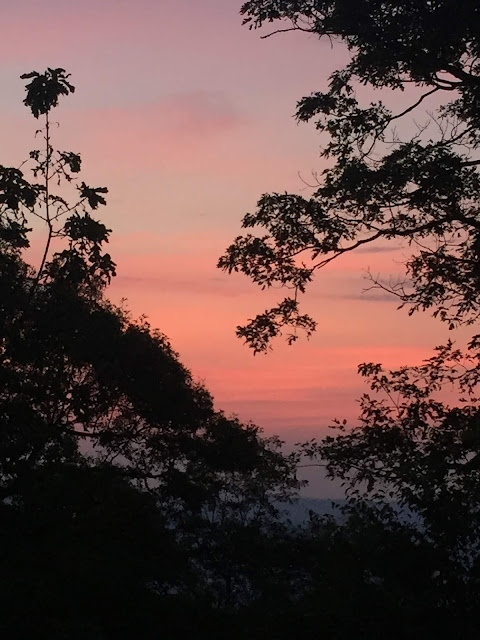 3.  A framed view right through the window of my room.  I have several other photos that actually include the frame of the window, but this one was just too pretty not to use. 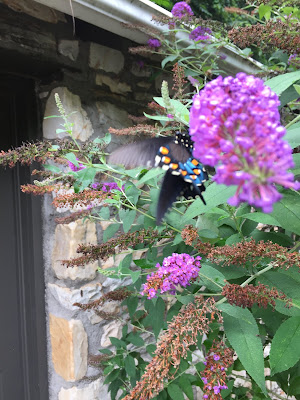 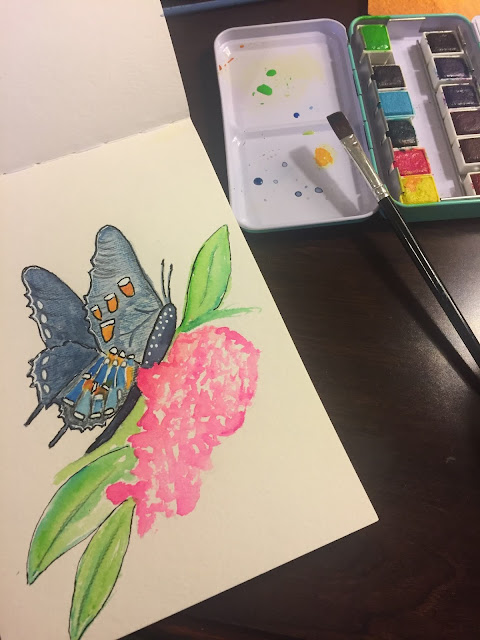 4.  Wings.  Outside of the Linville Caverns was a butterfly bush that was full of these butterflies.  It was nearly impossible to get a good shot because they did NOT sit still.  But this shot inspired this... which I created while at the retreat center.


5. Pedal Power.  Passed this door every morning on the way to the dining hall.  That bike was there the entire time! 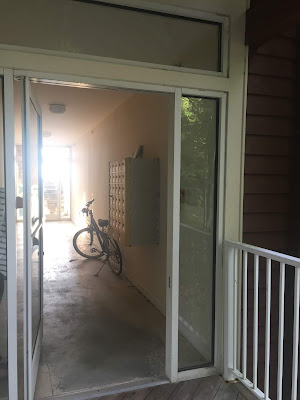 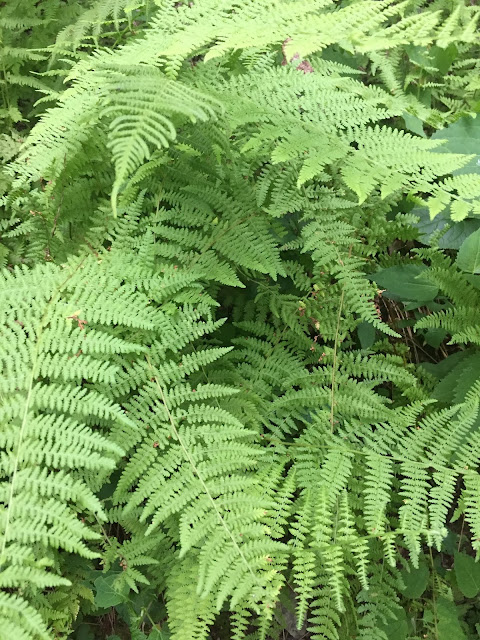 And to be quite honest ... it was green EVERYWHERE.  I have so many shots that would have worked for this one!  But I was kind of partial to these beautiful ferns. 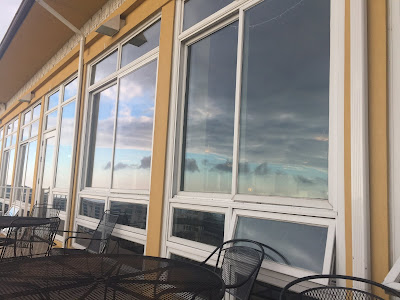 7. An unexpected reflection.  The building is the
dining hall from the outside. 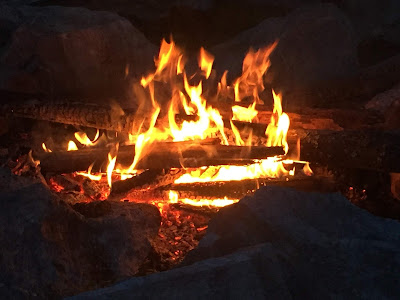 8. A pile of... logs.  For the Saturday evening campfire.  I just couldn't decide between this photo and the next, so you get both! 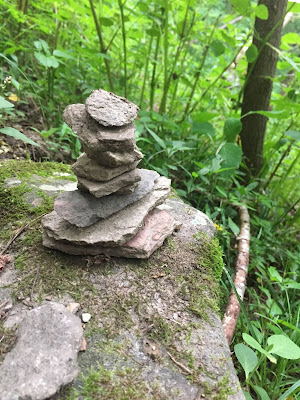 8. A pile of ... rocks.  By the side of a very precarious "nature trail" that tried its best to kill me.  To give you perspective... 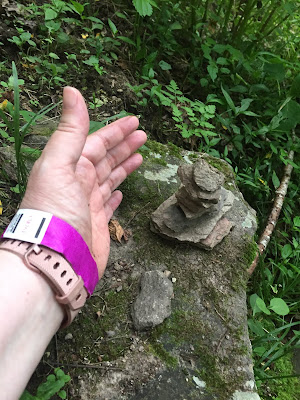 that pile of rocks
9. looks smaller than you [expected!] 10. A field of plenty.  So I'm taking liberties on this prompt.  Because there were no fields in the mountains.  But lots of hills and valleys covered with trees as far as the eye can see.  So there were PLENTY of trees in MY FIELD of vision.  I think I get credit for creative use of the words in the prompt! 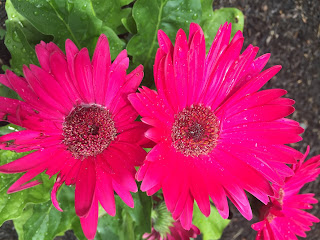 11. Pretty in Pink.  I did get some pink flowers on the trip, but I like these from my own yard better. 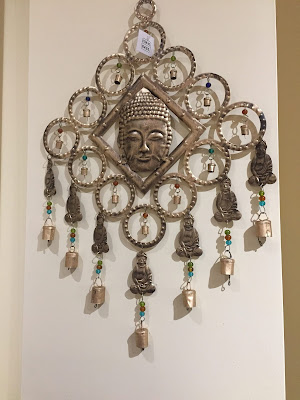 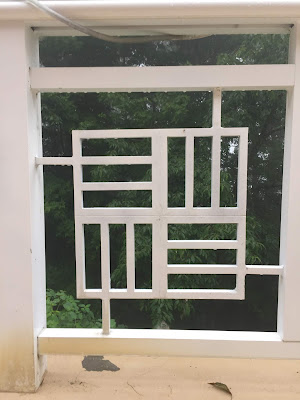 13. Equal Portions - railing along the deck of the dining hall. 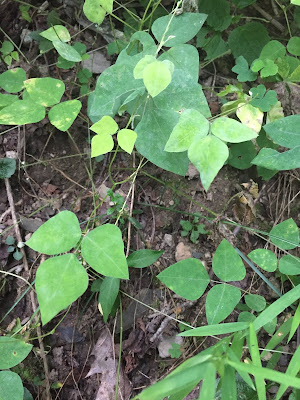 14. A Trilogy of Three - of the kind you don't want to mess with! That lined the aforementioned precarious nature trail.  I managed to avoid this stuff. 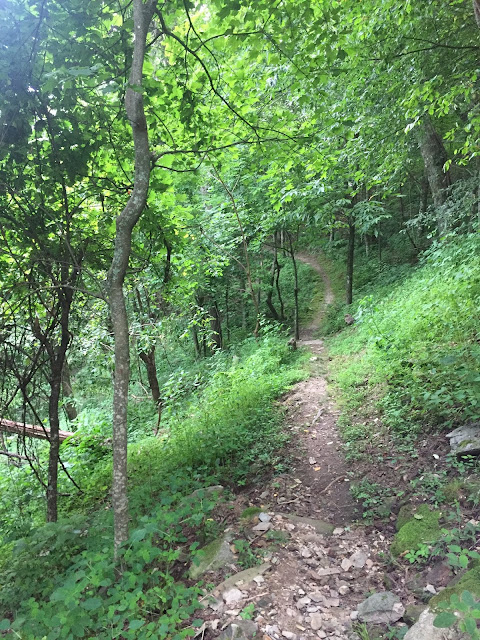 This was the "nature trail" - climbed straight up to the right of the photo, and fell straight down to the left of the photo.  The path itself might have been about 18" wide (that's being generous).  At one point my left foot slid off the path and headed down that hill... my body naturally started to follow my foot... luckily a dead tree trunk stopped me from going too far down the hill.  My right hand took the brunt of the fall, but is fine.  Sprained my left ankle nicely though.  This trail did NOT come with sufficient warning about not being designed for fat old ladies! 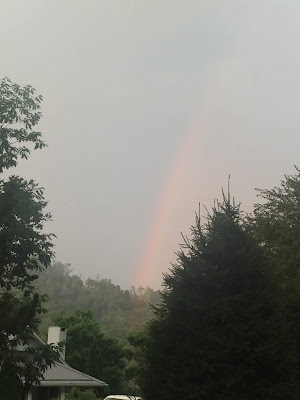 15. Out of the Blue - on our drive up the mountain, we came around a curve and saw this rainbow.  In the minute it took us to get to a safe place to take a photo it was nearly gone.  Amazingly, when we leaving the mountain and headed back to Nashville, on the same stretch of road, we saw... 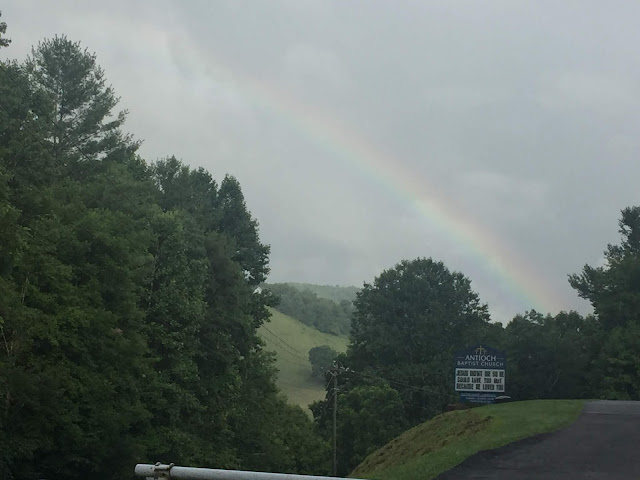 16.  From a Book or Movie.  The formations in the Linville Caverns reminded me of some of the scenes from the movie "Alien" with Sigourney Weaver. 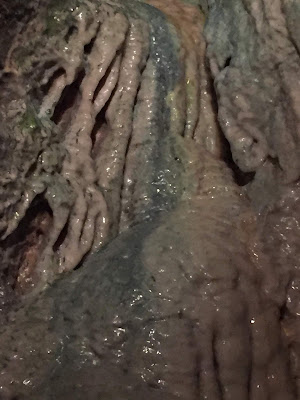 Or we could go with this one... That was actually taken on "Friday the 13th"! 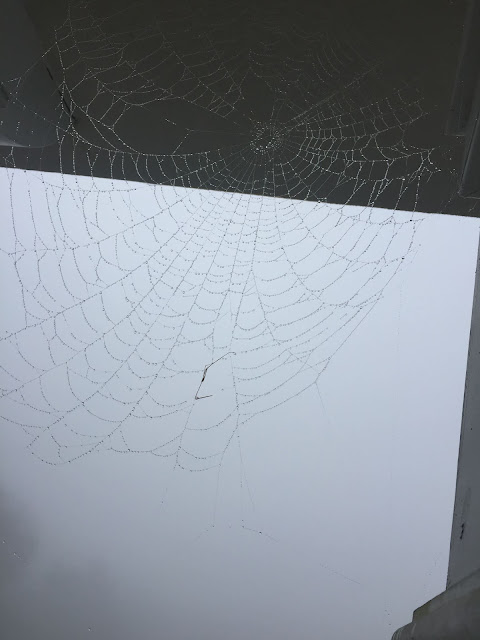 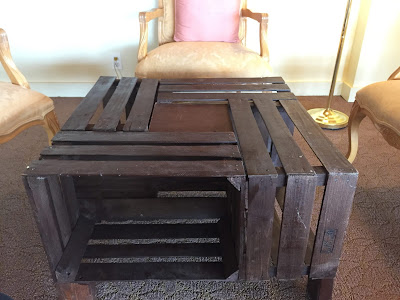 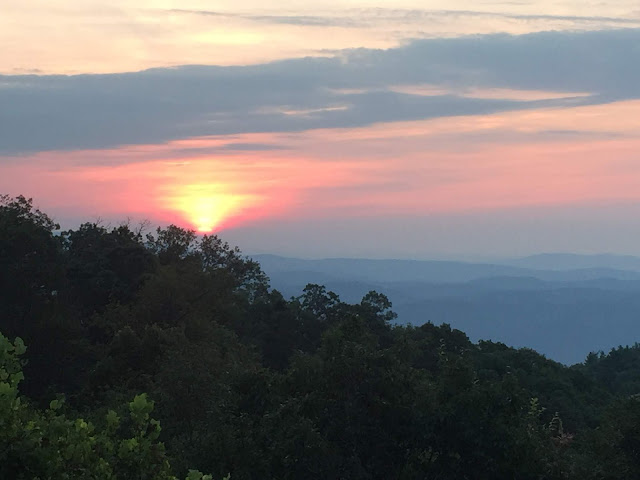 19. I'm liking this one for "Picture Postcard Perfect, although I also thought #3 was a contender. 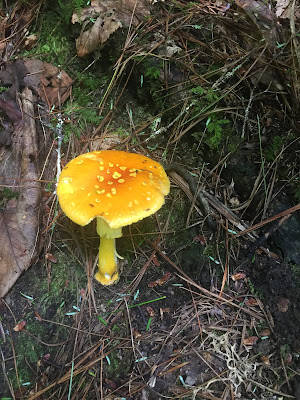 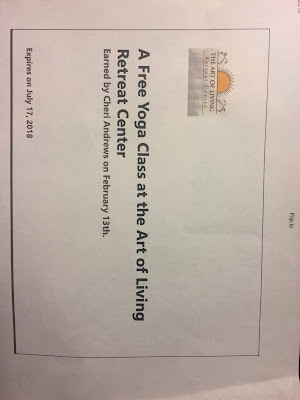 Alternate B: A coupon that did NOT get used.  My retreat (Friday afternoon - Sunday morning) involved a total of about 12 hours of yoga and meditation (mostly yoga).  I was going to use this coupon on Monday after the retreat ended (our extra day) but by then I had determined that I don't even LIKE yoga.  I'm still definitely sold on meditation though!

And because I simply can't end this post with a boring photo of an unused coupon... 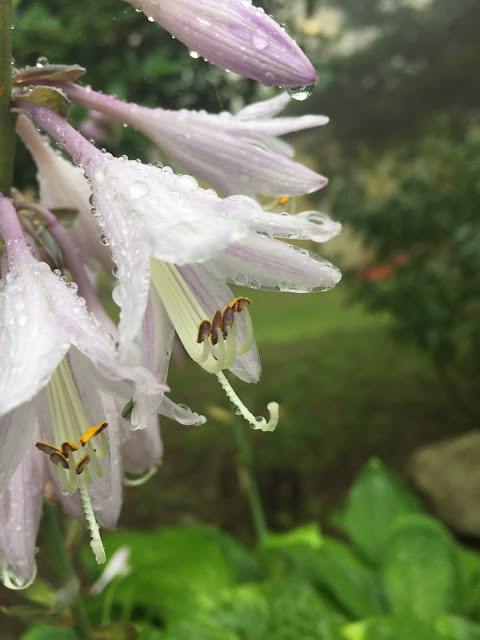 I'm leaving you with my favorite shot from the entire trip.

These are all unedited iPhone 6 photos.

Bidding a Sad Farewell to The Digichick

My time on Kimeric Kreation's creative team was cut very short. I knew when I signed on for Kim's team that she was battling cancer.  Neither of us knew how little time she had left.  I was able to create layouts from two new releases before she was unable to create any longer.

Kim was not just a designer, but also the owner of The Digichick shop.  Although she tried to make arrangements to pass the shop along to a new owner, there just wasn't sufficient time for all the knowledge and information to be shared.  Kim passed on July 11, 2018, at home with her partner Eric.  And ultimately all the potential new owners determined that it was just not feasible to operate the shop without Kim - the shop's true heart and soul.

So right now everything in the shop is on sale 50% off.  Good through July 31 only.  Then the shop closes it's doors forever. If you are looking for a bargain on some beautiful digi supplies, now would be the time to visit!

As a tribute to Kim, all of the designers at The Digichick contributed to this beautiful collab:

This entire kit is available for just $9.00 HERE.

Here's the layout I made with this kit:

In creating this layout as a tribute to Kim, I consciously chose colors, styles, and elements from the collab kit that she would have used in her own designs.  But this kit is HUGE and has something for everyone and every style.  If you want to see how many different ways a single kit can be used, go to the link above and check out all the different tribute layouts made from this kit!

I have plans already in play with a couple of other designers, but I'll save that post for another time.  Today I just want to honor Kim's beautiful spirit and give thanks that I collected so many of her kits over the years that I'll still be scrapping with her designs for years to come!
Posted by Cheri at 5:40 PM 3 comments: