Okay, I know it isn't Sunday. And I know I have the wrong week and am hopelessly late to the party. But in the interest of finishing out my 12 posts this year, I need to sneak this one in...

Hope Chests were historically used by young unmarried women and/or their families to collect clothing and household linens that would be needed by the young woman in anticipation of marriage. In the United States a hope chest was a traditional coming-of-age gift back in the 1950's.  It is still somewhat of a tradition in the southern states, but mostly has died out everywhere else. These days young women get everything they need for marriage via bridal registries.

The Lane Company of Altavista, Virginia began producing and distributing hope chests in 1912.  It was their practice, beginning in approximately 1930 to distribute miniature 12" long  cedar keepsake boxes to graduating high school girls as advertising gifts. And yes, that is where my love of hope chests began, with this little box: 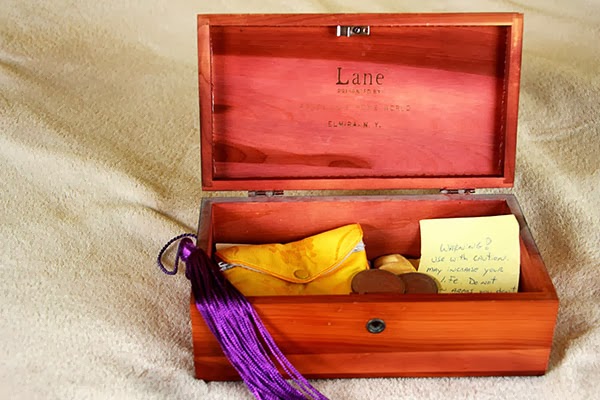 I got this in 1979 when I was graduating high school. This little box still sits on my dresser and houses things like my tassle from law school graduation.  It was distributed by Panosian Home World, which appears to have gone out of business. The Lane Company was purchased in 1987 by hostile takeover and the plant closed in 2001. I guess that now makes these little Lane keepsake boxes a thing of the past.

In any event, the advertising worked because from the moment I got this little box, I longed for a real hope chest. Don't ask me why. I just know I wanted one. And eventually I got one - six years later, as a wedding gift from my mother: 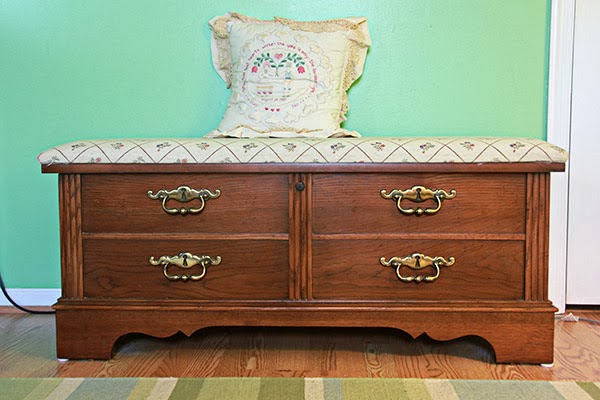 This hope chest resides in my bedroom. It has never held household linens and clothing. Instead, it has been the repository for many keepsake items that I would never give up. And for the last two months of Story Telling Sunday, I'll be sharing with you some of the items tucked away in my hope chest.

By the way, the hope chest has also been a great bench for sitting on to tie shoes, or for stacking clean laundry until it gets puts away. It is unusual to be able to see the surface! :) 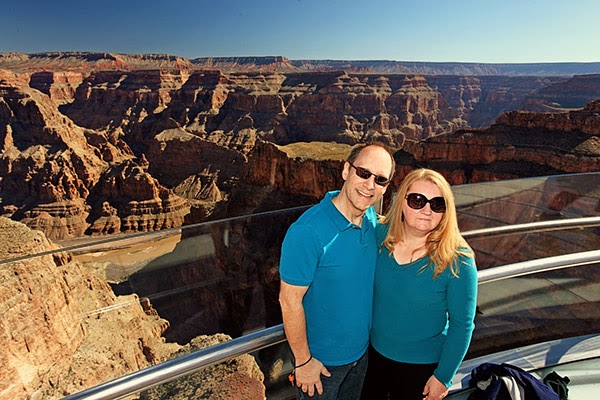 Those of you who follow me on Facebook or Instagram know that I've been away. October 1st - 9th. Boise ID, Kingman AZ (Grand Canyon West Rim), and Las Vegas NV.  I went through five airports in as many days. Part business trip, part pleasure. Jay and I LOVED our day at the Grand Canyon West Rim. Las Vegas? Meh. Not so much.

I'm still catching up with my life. And my sleep. Caught hopelessly between the need to do and the need to rest. I came home to 155 blog posts and nearly as many emails. I have visited all your blogs since my return but had to give myself a pass on commenting on everything. I'd love to promise that I'll soon be back to all my regularly scheduled posts, but the truth is... I leave again in a week.

The assignment for September required us to interview someone with respect to how they see our word playing out in our lives and record the results.  I took advantage of my trip to Dallas to interview Sandy (my mother) and Melissa when she joined us for a day of scrapping and chatting.  I was so happy to hear the words of encouragement from these two very wise women!

It only took a little orange marker, washi tape, and some painted thickers to really finish off these pages! 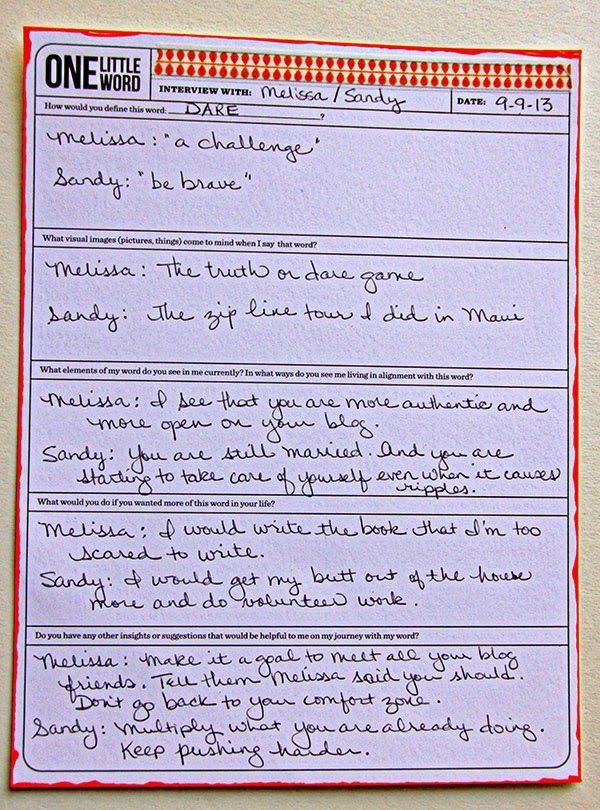 Seems they both already think I'm doing a pretty good job of living my word "DARE" - I just need to keep on walking down the path I've started. 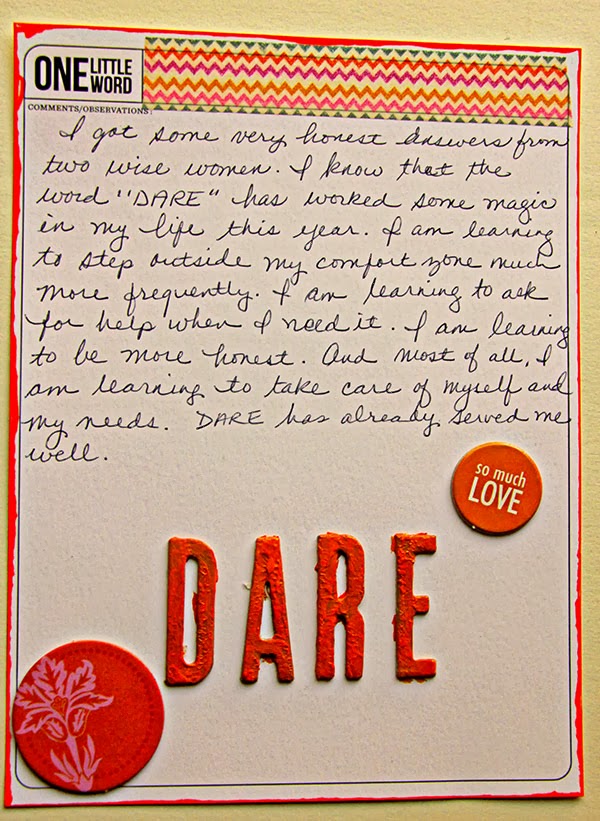 My tracker for this month - as far as I had it done for taking pictures to put together this blog post. Can't wait until the last minute this month as I'll be on a plane headed for Boise Idaho when you are reading this post! 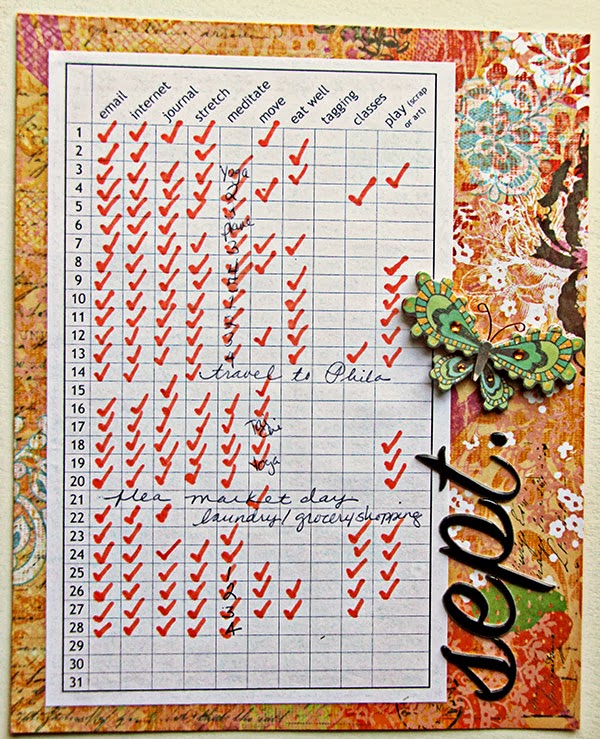 But what I really want to tell you about is the BIG DARE I accomplished in September...  Due to some unfortunate circumstances in my childhood, I grew up with an irrational fear of guns and swore I would never touch one, never own one, never have one in my home.  As I have matured, I've learned enough to know that it isn't the gun that is the problem, but the person who is holding it.  So while in Texas I confronted this fear head-on.  Mike (my step-father) took me to a shooting range and showed me how to shoot. 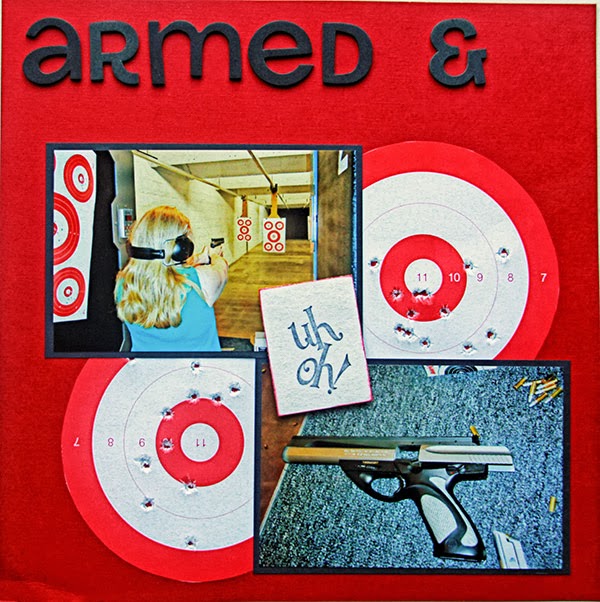 22 caliber Beretta.  And those targets are from the actual target sheet I was aiming at. 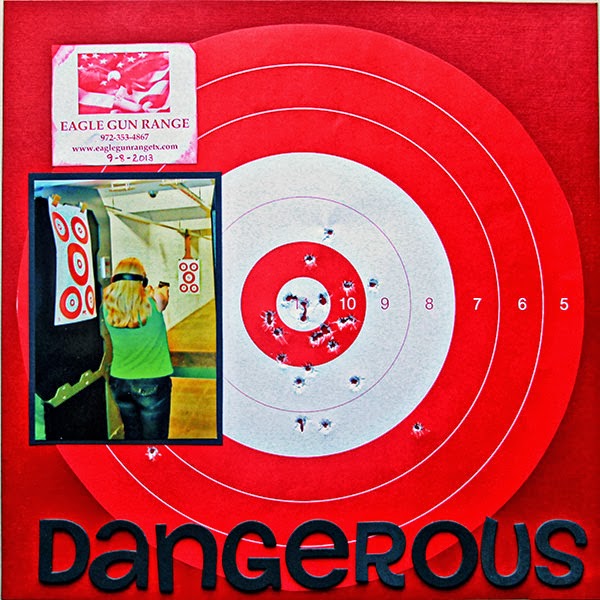 Turns out that guns aren't that scary after all.  And I'm a much better shot than I ever thought I'd be!


If you are continuing on in the hop, your next stop is  Margareta's Blog.