Time to Catch My Breath

Have you missed me?  It's rare that I go a full two weeks without a single post.  But sometimes life happens that way.

December has been insanely busy.  And I've been sick since December 1st.  With the never-ending knock-you-on-your-ass head cold.

I normally have about one day every other week out of the house (in the office or traveling for work).  This month I have been away from home two days per week - every week.  For those of you who work 5 days a week away from home, this may seem like no big deal.  To me, it has been exhausting.

I had a 14 hour day traveling to/from and attending a Continuing Legal Education Seminar in Philadelphia. 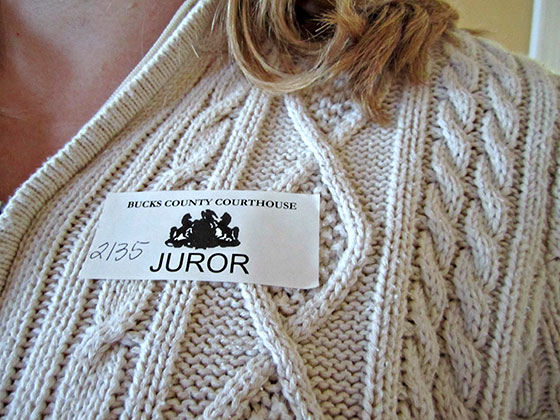 Followed by a 1/2 day of jury duty during which I never left the  juror's lounge.

Despite being sick, I've had 5 days of meetings in the office.

And my company holiday party.

Despite being sick, I launched a huge records retention project this month. A project I'm in charge of... and sweating over...

Despite being sick, Christmas presents were purchased, 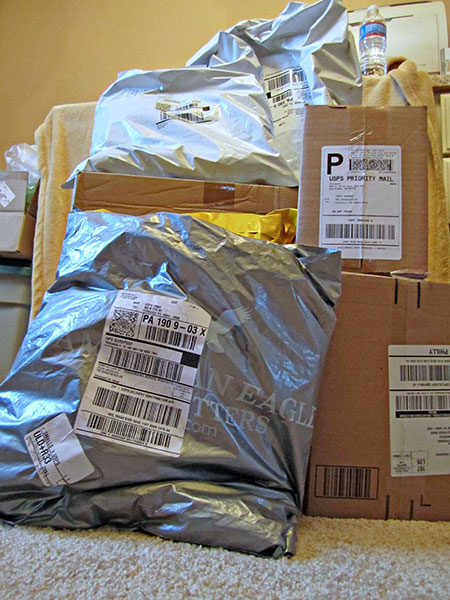 yes... from the comfort of my computer chair!

And they were  wrapped.  I finally finished yesterday! 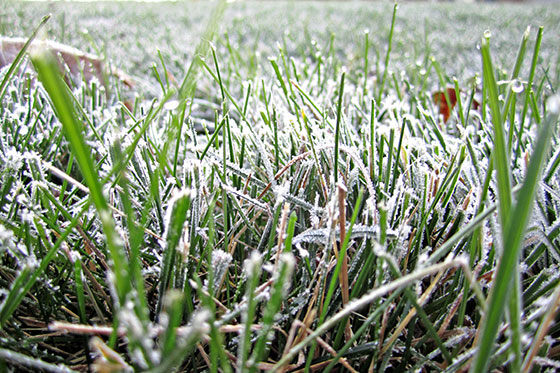 We've have several frosty days.  Mixed in with a lot of unseasonably warm.

We haven't had snow since that freak storm in October.

I've been sleeping - a LOT. Despite being sick, Christmas cards and a newsletter were created.

Cards were mailed. Later than normal for me, but done.

Despite being sick, I started a Tai Chi class. 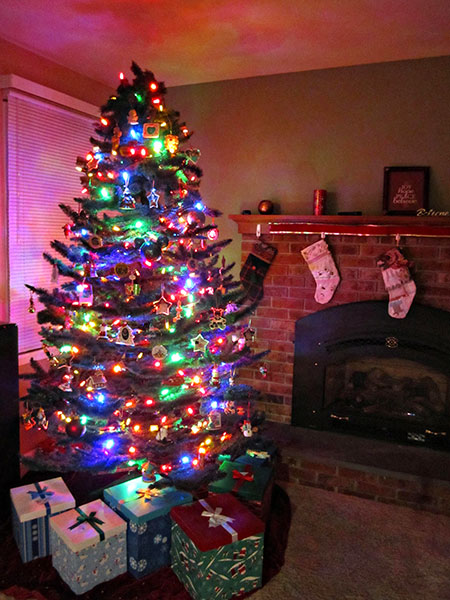 Despite being sick, the Christmas tree was put up and decorated.

The stockings were hung by the chimney with care.

Our Christmas Eve boxes have been filled (new pjs and ornaments).

Despite being sick, laundry was washed and groceries were purchased, meals were made, and life went on.

... what you see on this blog post is literally all the pictures I've shot this entire month!

... not a single JYC/December Daily page has been created and I think I may need to just let it go this year.

Yes, life does go on with or without me.  I'm as ready for Christmas now as I can be. And ready to enjoy a week off work and some time to slow down.  And catch my breath.  And maybe create a little.  I'm ready to leave 2011 behind.  I'm ready to embrace 2012 with open arms.

I wish for each and every one of you a blessed Christmas and a Happy and Healthy New Year.  See you soon!
Posted by Cheri at 2:59 PM 17 comments:

Email ThisBlogThis!Share to TwitterShare to FacebookShare to Pinterest
Labels: Catch My Breath

Just a Quote for Friday

Email ThisBlogThis!Share to TwitterShare to FacebookShare to Pinterest
Labels: Just a Quote

This really isn't much of a story - more just an acknowledgement.  I think that grandparents play a very important role in a child's life. So I was grateful to have these people in my life: 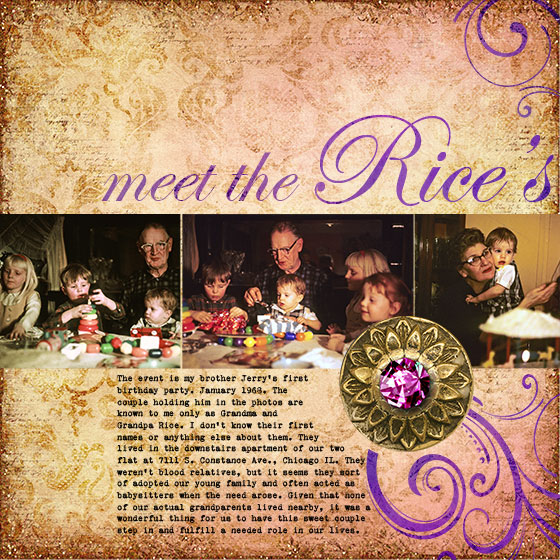 Grandma and Grandpa Rice were not actually my grandparents. They were an elderly couple that happened to live in the downstairs apartment of a two-flat in Chicago. We lived in the upstairs apartment. At the time of these photos, I was 6 1/2, Deanna (the little red head in the center photo) was 2 1/2, and Jerry was just turning 1.  The other boy in the photos is my cousin Geoff.

But back to the Rice's... other than occupying the same apartment building, this couple had no ties to our family.  Yet they chose to informally adopt our young family and fill in as grandparents in a home where all the biological grandparents had either died or lived far away in other states.

I honestly know nothing about the Rice's, other than the last name. And that they were wonderful loving people who fulfilled a needed role in the lives of three young children for a time.

Seeing these photos reminded me of the saying "People come into your life for a reason, a season, or a lifetime... Some people come into your life for a SEASON, because your turn has come to share, grow or learn. They bring you an experience of peace or make you laugh. They may teach you something you have never done. They usually give you an unbelievable amount of joy."


The Rice's were definitely in my life for a season and gave me the opportunity to experience the kind of love that only grandparents are capable of offering. When I came across these photos recently, I knew I needed to document these special people who were an important part of my life for a season.


For more of Storytelling Sunday, visit Sian's Blog From High in the Sky.  There's already 27 other bloggers with stories to share!

Just a Quote for Friday

Email ThisBlogThis!Share to TwitterShare to FacebookShare to Pinterest
Labels: Just a Quote

Well... it's that time again.  And I'm so proud of myself that I've mostly kept up with this class all year!  Seriously considering doing it again next year and just continuing in this same album.  The One Little Word Class is taught by Ali Edwards and offered through Big Picture Classes. It is running again next year - just opened up for registration - and it is only $36 for the full year!

So, somehow in November I didn't end up on the blog list.  I didn't realize until I was going to bed last night that I had never received the final email from Margie, so it was too late to follow up with her and get added.  But I'm joining in anyway! :) 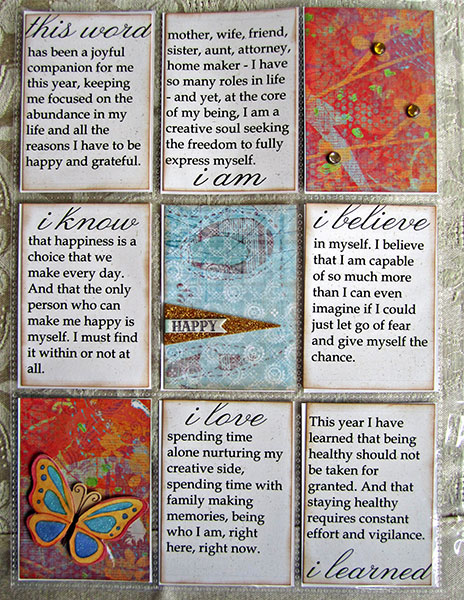 November's prompt was a series of "i" statements. Which really caused me to sit down and think seriously about where I was with my word this late in the year.

I used leftover scraps from my November progress chart to fill in the blank spots. 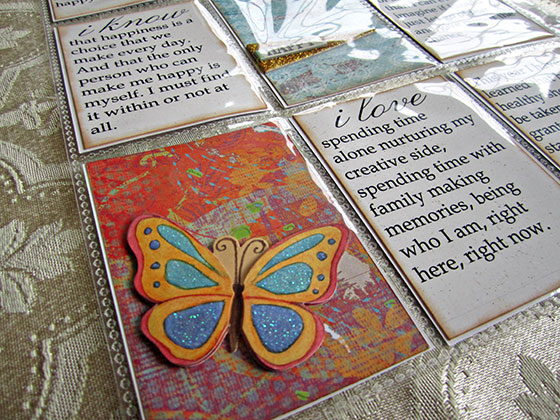 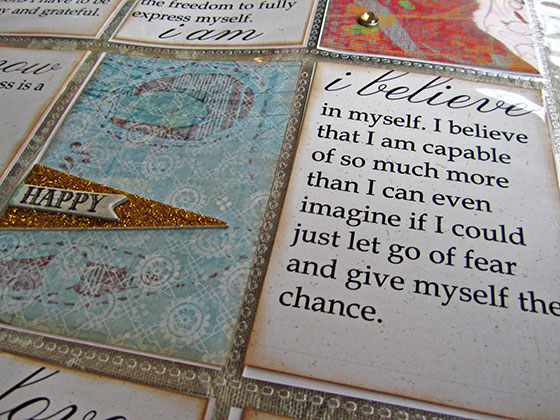 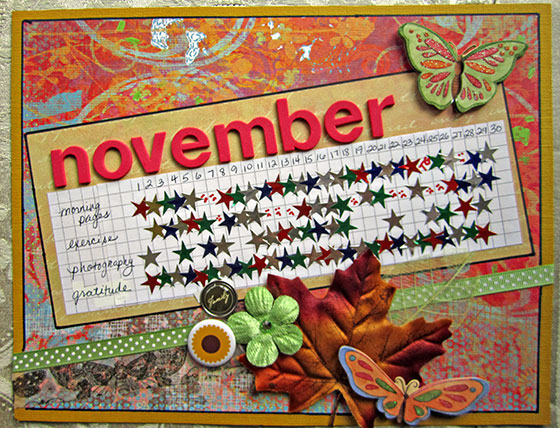 and finally, my progess chart for the month - photographed half way through the 29th.

I actually wrote down was I grateful for EVERY day this month!

For more One Little Word Inspiration, check out the entire blog hop.  Here's the list: