Want to learn some new photo editing tricks in Photoshop? Check out this FREE class being offered at www.jessicasprague.com!

Register THIS WEEK, class begins July 6th! I'm already signed up and can't wait to see what new stuff I'll learn. It's always an adventure with Jessica and Liv.

To take advantage of the free class, log-in to www.jessicasprague.com. If you aren't already registered on the site, you will need to register first, then log-in. Once you are logged in, click on "redeem gift codes" (from the general menu on the left), then type "FREECLASS062009" in the code box. That's it! See you in class!

Stay OUT of the Garage!

I spent yesterday (9 a.m. to 5 p.m. - yes ALL day) cleaning out our garage. The girls came out around 11:30 and helped for the rest of the day. Literally took everything movable OUT. Cleaned out years worth of dust, dirt, sawdust bunnies, and mouse poop. Washed the window. Sorted stuff by type/purpose (lawn & garden, sporting goods, auto, hand tools, etc.). Removed one highly under-utilized old dresser (storing auto parts for cars we no longer own). Then moved stuff back in - mostly to original positions, but organized by use. 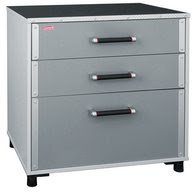 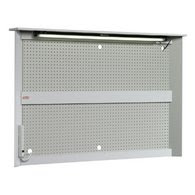 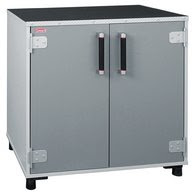 This is the new part. Moved in a nice workspace for Jay, something he had indicated in prior discussions about expanding the garage that he would really like to have some day. The set includes two cabinets - one with 3 drawers, one with 2 doors that has shelves inside - and a "hutch" piece that is peg board with an attached light and power strip and lots of space to hang tools for easy access. The two cabinet pieces, side by side, create a nice workbench surface and the peg board hutch sits at the back of it. The whole idea behind this purchase was to provide Jay a nice workspace in the garage as his gift for Father's Day. Anyway, move all done, garage back together, four sweaty, filthy, exhausted women.

Jay comes home. He is suitably surprised with our work but trying to figure out where we put everything (most stuff hasn't really moved from original positions). As he is becoming reacquainted with his garage, he sees the location of the snow blowers. Now understand, placement of the work space necessitated moving our two snowblowers (yes, TWO) into a small space in front of my car. Why two snowblowers? Our driveway honestly isn't that big to begin with. But apparently the smaller one is good for snow less than 6", the larger one for over 6" (which happens once every five years? maybe?). No deal. Ugh.

Apparently where I chose to store the snow blowers will NOT work because they are not readily accessible without moving my car back (which of course you can't do unless you open the garage door and back it out into the two foot pile of snow sure to be sitting there). So now he is brainstorming ways to fit his new storage (which can't be returned BTW - it's assembled!) into the garage and have the snowblowers in a place where they can be turned right out into the middle of the garage with both cars in it. Okay, you'd have to know our set-up but this is IMPOSSIBLE! His current thinking is to hang the hutch piece on the wall, stack the two cabinets facing sideways out from the wall, and park the large snowblower in front of them. Which means whichever cabinet is on the bottom will be completely inaccessible unless you MOVE the snowblower. Which is exactly where the under utilized dresser sat - blocked so that you couldn't get into the bottom two drawers - which may explain why Jay didn't know he was storing oil filters from vehicles we owned in 1999!

The point of my rant? Lesson learned: never never never enter a man's domain and try to organize it for him! He hasn't moved things around yet, but I am certain he will. And when he does the entire point of the exercise, that four women spent all day on, will be forever lost. He will not have the workbench surface, he will not have the open workspace we created for him. Guess he didn't want it bad enough to put up with having to reach an inaccessible snowblower once every five years.
Posted by Cheri at 7:17 AM 2 comments: 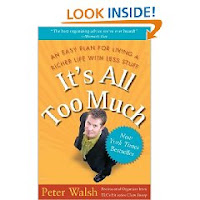 Do you own your stuff or does it own you? I'm reading "It's All Too Much" by Peter Walsh (of TLC's Clean Sweep series) and it really resonates.
Peter says: "Clutter is insidious, a slow but steady tide. It enters your home little by little, usually over years. Clutter sucks life away. It leaves you depressed, overwhelmed, lacking motivation, and unable to breathe. Clutter prevents you from enjoying the most precious, intimate moments in life. Clutter robs you of far more than the space it occupies - it steals your life!"
Oh - I couldn't agree more! A little further into the book he expounds on the excuses we all have for not removing the clutter from our lives. Excuse #5 "I don't have the time" is my personal excuse. But I was reading on another blog (The Happiness Project) how the author has changed her personal philosophy from "I'm in a hurry" to "I have plenty of time for the things that are important to me."
Okay, busted. If getting rid of that clutter was really important to me, I would make the time to take care of it! So today I made time. I listed 3 cropper hopper work stations, 2 student clarinets, a cash register, and a credit card imprinter on craigslist. Listing the CH work stations has been on my "to do" list since January! The clarinets - sitting in a tub untouched for 3 full years now! Anything that hasn't sold in a week, they are going to Good Will and I'll just take the tax deduction. Time for this stuff to LEAVE! Now if I could just convince Jay that we don't need two snowblowers and four ladders....
Posted by Cheri at 2:33 PM No comments:

Some of you might be wondering - so, Cheri, where the hell have you been??? I've been here, I've just been utterly uninspired. I've been updating and tweeting and involved in multiple online courses simultaneously and very very very busy. But not so busy that I couldn't blog. I just haven't felt the blog spirit move me recently. Sorry.
My journey I've been while I've been M.I.A.:
Big Picture Scrapbooking - the Library of Memories (second time fully engaged in this class), Wellness Journey, and Everyone Can Write a Little classes have just wrapped up. Absolutely adored ECWL and would highly recommend it to anyone when it is offered again in the future! Here's a sample from my ECWL album: 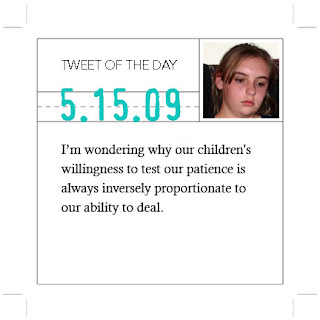 and yes, that thought is fairly representative of my mindset of late. Now aren't you happy I haven't been posting that kind of heavy stuff on a regular basis?

Now I'm eagerly anticipating Lisa Day's "Challenge of Me" class at BPS (starts June 25) and then Cathy Zielski's "Me: The Abridged Version" which hasn't opened for registration just yet (starts in Sept.). I'm aware that the themes of these classes are similar, but I know each teacher will approach this from a very different angle and I expect I'll still end up with two very different scrapbooks out of it!

Simplify 101 - Just finished "Organize Your Paper Clutter" and now I'm knee deep in "Organizing 101". Thanks to these classes I've recycled SIX grocery bags full of shredded paper, taken a trunk load of stuff to Good Will, and have a blissfully clean laundry room and a well-organized and fully stocked linen closet. Other projects for the next few weeks include the upstairs hallway bookcase (aka "junk case") and the downstairs hall closet. Aby is very sweet and very involved in the class forums. Good stuff. Another round of the paper clutter class starts soon if you are interested.

Jessica Sprague - signed up for the "ACDSee" course - got through the intro and stalled. Need to get back to it. I don't seem to do as well with the self-paced classes. Never finished all the layouts from "Type + Writer" either, so I need to get myself motivated to get back to those soon.

Other than that, I celebrated my 48th birthday with a quick day trip to NYC (where I DID see the famous Naked Cowboy) and had a lovely lunch at Bubba Gumps. 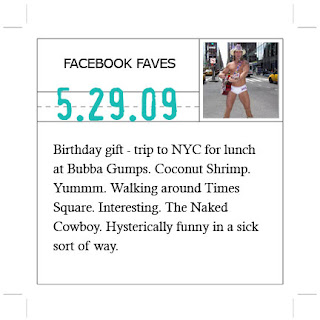