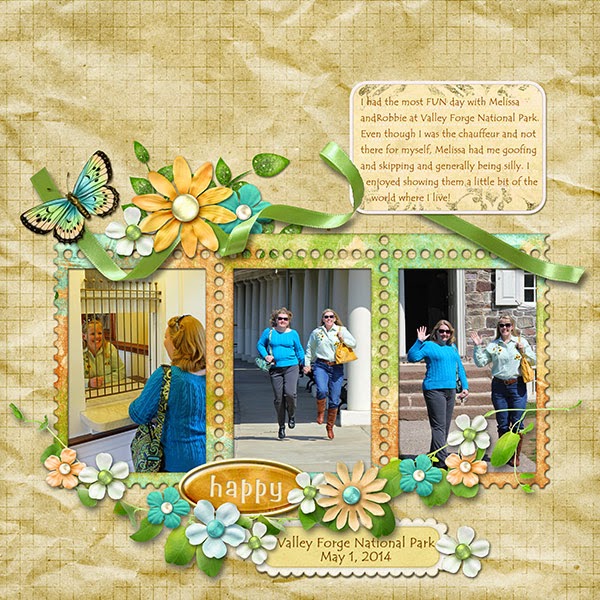 Yes, more of Melissa! This is a Miki Ferkul Quick Page, but I did add the journaling block at the top and had to do a little fancy work with Photoshop Elements to blend it it with that ribbon. The colors and layout of the page seemed perfect for the photos and just reminds me of Melissa's sunshiny personality! I wonder what my family will think when a print out of this finally makes it into the albums??? 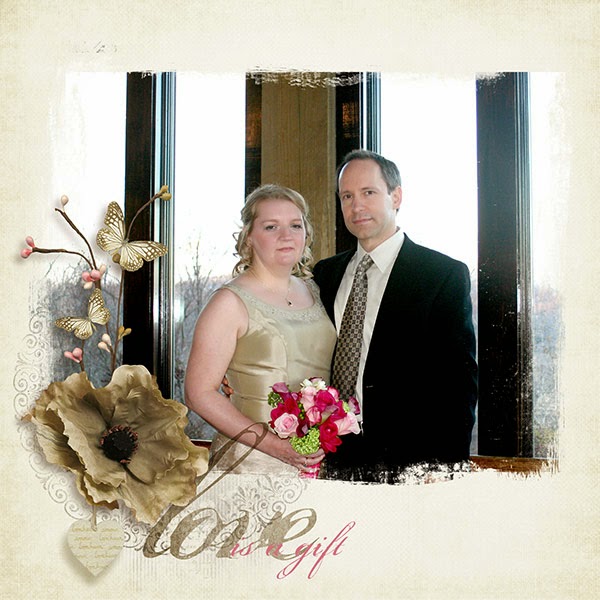 This is a Studio Rosey Posey blended template, used totally as is, with a photo from 2005. I may go back and add journaling to the bottom and a date to that heart tag. Although it is certainly okay just as is. 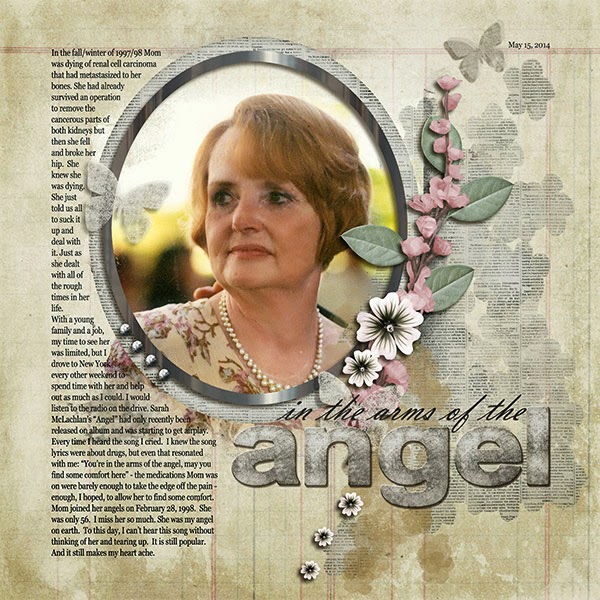 This layout began with a prompt to use a song that defined a period in your life. I started with Studio Rosey Posey Blended Template #14. With a lot of changes, resizing, and adding some elements from Krystal Hartley's "Butterflies Are Free" kit. Although it wasn't an easy story to tell, I'm so happy to have it recorded and this layout will probably end up being my favorite from LOAD514. 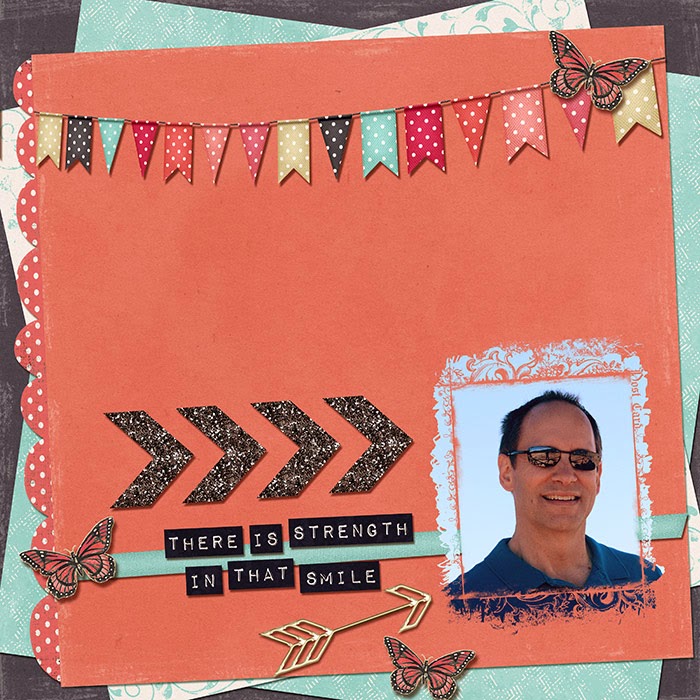 Began with a creative team challenge to use Krystal Hartley's new "Putting on My Happy Face" kit and trying my hardest to keep the layout "manly" while using a lot of girly elements. Did I succeed?  No template here, created this one totally from scratch. 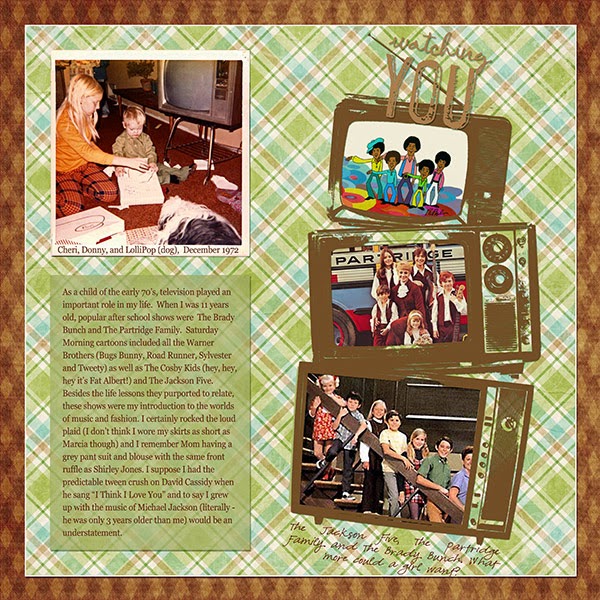 The LOAD prompt for this layout was "Boob Tube" - what did you watch on television when you were young? I sourced the television show photos online and then found the great stacked television template from Katie Pertiet. I chose plaids from my stash of digi papers that went with the times and the photo of me at 11 years old rocking orange and navy plaid pants, with the old television in the background. I had FUN putting this one together!

I think the song/tv show prompts are fantastic story starters for scrapbooking. I know I personally have several other songs in mind that defined specific periods in my life and I'm actually considering creating a "Soundtrack of My Life" album with a layout about each song that had special meaning for me. I've even considered the idea of making it into a monthly meme for the second half of 2014. Would anyone be interested in playing along?

So if you had to choose a song - or a television show - that defined a time in your life, what would it be and why?

I would definitely be interested in playing along with that. There is a show on the radio here in the afternoons which asks for a list of ten favourite Golden Oldies. I have my list which I have never sent in and never scrapbooked.

Your pages are as always a LOAD inspiration

All these layouts are fantastic - they look just like out of a scrapbook magazine. I like the idea of choosing a song that defined a specific time in one's life. The first song that came to my mind is "Candle in the wind" - the "rose of England" version by Elton John that he recorded when Princess Diana died. We were in England at that time, and had just found out that I was pregnant with our daughter. A time of abundant joy mixed with sorrow.

What a FUN group of layouts. Of course, I love that first one because it reminds me of the great day we spent together!! The one about your Mom is absolutely beautiful! I like the idea of the songs - not sure that I have songs that define times in my life, but there are lots of stories about songs & music & singing that I would like to record.

Such a great selection again...I love the one of you and Melissa.
I remember sitting holding my baby girl at Christmas while listening to 'Feed the World' and thinking how lucky I was.

Everything about the layout about your mom is just beautiful---the photo, the design, the journaling. I also love the photo of you and Jay, and of course, the FUN photos of you and Melissa!

Ah, David Cassidy and the Partridge Family - happy memories! Like you, I literally grew up with Michael Jackson's music - this post has brought back a lot of memories.

What a range of emotions and subjects you've covered here. That one of your Mom is so touching - glad you have it covered.

Not sure about a song defining a stage in my life hmm going to think about that.

What a glorious visual feast :). And very touching too - fifty-six is indeed so young and that must have been a very difficult time for you all. A lovely photo ... And your first one is such a great celebration of a happy day. Just looking at the two of you skipping makes me feel happy.

What a great range of pages. I love the skipping photo, the flags and the one of your mom!
I think meaningful songs would be a wonderful meme.
Rinda

Hi, Cheri! Love your TV & angel pages. That song had just come out when I lost a good friend & would frequently play on the radio on my way home from visiting her grave. Can't hear the song today without thinking of her. Your LOs rock, as per usual. Been meaning to email you since I left the blogosphere b/c I've missed you, but I'm glad I hopped onto your blog instead b/c I've also missed your beautiful work!