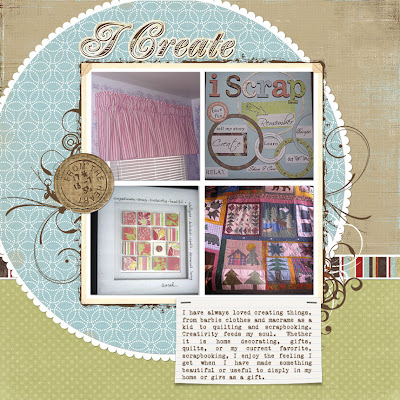 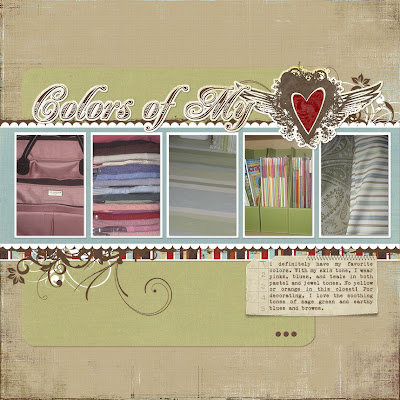 Two more pages from Beautiful Evidence. I'm watching this album grown and loving it! It's going to be so beautiful!

the Day you were Born 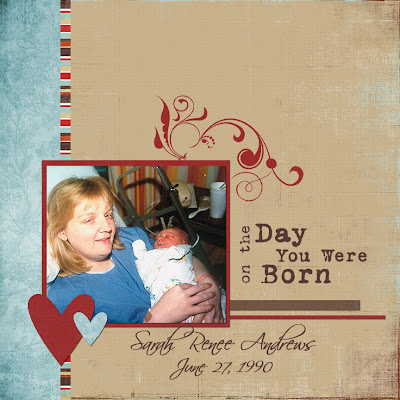 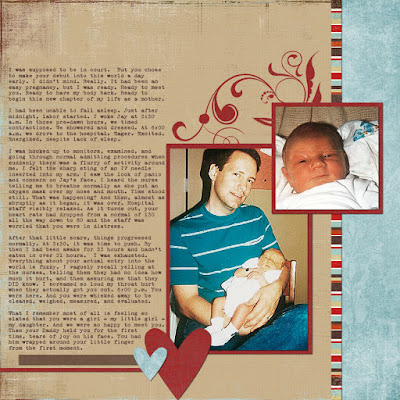 Remember how I mentioned that I've gone and overextended myself with online classes? Here's proof - this two page layout is the Week 1 assignment from Telling Stories Deeply over at Big Picture Scrapbooking. The Week 2 assignment was posted yesterday. I'm a little bit behind.
The journaling reads:
I was supposed to be in court. But you chose to make your debut into this world a day early. I didn't mind. Really. It had been an easy pregnancy, but I was ready. Ready to meet you. Ready to have my body back. Ready to begin this new chapter of my life as a mother.
I had been unable to fall asleep. Just after midnight, labor started. I woke Jay at 3:30 a.m. In those pre-dawn hours, we timed contractions. We showered and dressed. At 6:00 a.m. we drove to the hospital. Eager. Excited. Energized, despite lack of sleep.
I was hooked up to monitors, examined, and going through normal admitting procedures when suddenly there was a flurry of activity around me. I felt the sharp sting of an IV needle inserted into my arm. I saw the look of panic and concern on Jay's face. I heard the nurse telling me to breathe normally as she put an oxygen mask over my nose and mouth. Time stood still. What was happening? And then, almost as abruptly as it began, it was over. Hospital staff visibly relaxed. As it turns out, your heart rate had dropped from a normal of 130 all the way down to 60 and the staff was worried that you were in distress.
After that little scare, things progressed normally. At 3:30, it was time to push. By then I had been awake for 33 hours and hadn't eaten in over 21 hours. I was exhausted. Everything about your actual entry into the world is fuzzy. I vaguely recall yelling at the nurses, telling them they had no idea how much it hurt, and them assuring me that they DID know. I screamed so loud my throat hurt when they actually got you out. 6:00 p.m. You were here. And you were whisked away to be cleaned, weighed, measured, and evaluated.
What I remember most of all is feeling so elated that you were a girl - my little girl - my daughter. And we were so happy to meet you. Then your Daddy held you for the first time, tears of joy on his face. You had him wrapped around your little finger from the first moment.
Posted by Cheri at 1:15 PM No comments:

just a photo and a few words... 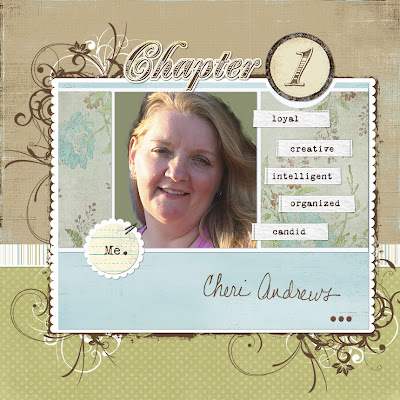 Choose five characteristics to describe myself? Hmmm... thought about short-tempered, cranky, demanding, impatient, and easily distracted (my darker side) but this is supposed to be about the "beautiful" things in my life. Luckily I do have a good side! 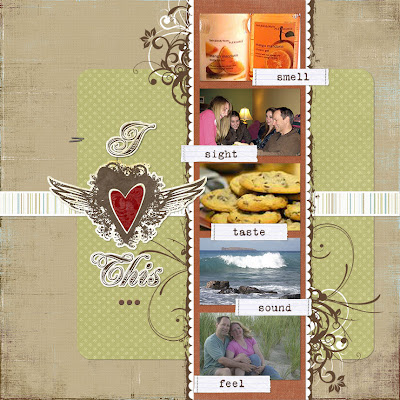 This page was fun - but I just couldn't help myself. I did change out two of the papers JS had on this page - the orange in the top photo just screamed for a different photo mat. But it's all good - I'm still caught up with the class (for now). Isn't it funny how you can describe "I love the feel of safety and love wrapped in Jay's arms" with just a photo and the word "feel"? And for anyone whose mind went somewhere else, shame on you!
Posted by Cheri at 8:46 PM 1 comment: 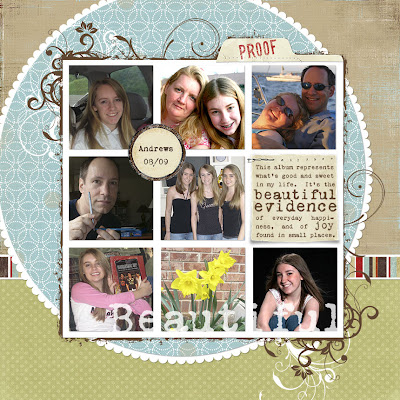 I am WAY TOO BUSY! Between back-to-school shopping for three teenage girls (that was all day trips on Friday and Sunday, and a quick two hour run on Saturday), and getting Sarah ready to take back to S.U. tomorrow (Jay did the WalMart/Target run with her today. Can you say $450 later? When did OTC meds, shampoo, and tape get so expensive anyway?) I'm already exhausted.
As if that is not enough, I've once again over-extended myself on online classes (some teachers/subjects I just can't bear to pass up). This new class at JessicaSprague.com is one digi page a day for 20 days with the final result being a ready-for-print photobook. In an effort to keep up and complete this one, I'm TRYING very hard not to overthink it - to just fill in the templates exactly as Jessica has outlined for the class. So there is little to no creativity on my part here, but I still think the finished result will be beautiful. Oh, and match the color scheme of my scraproom!
Speaking of scraproom.... no, it isn't done. But I did get this little corner of my new world done, complete with sewing of the cushion cover and pillows! 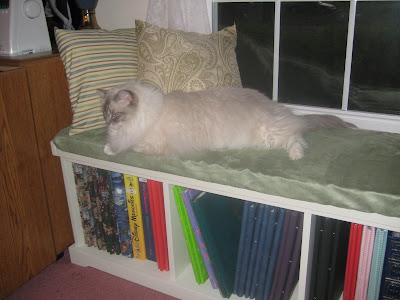