I went to the gym in the morning and did a full strength training/cardio workout. Little did I know... 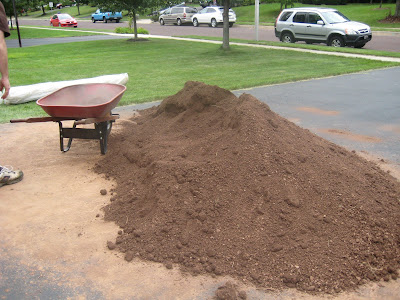 We had 8 yards of dirt delivered. That is TWO truckloads people! This pile represents about 1 - 2 yards left of the second load - so something less than 1/4 of the total amount. 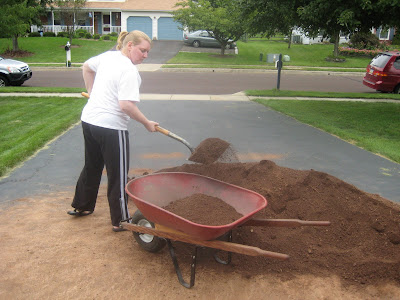 And yes, that is me shoveling dirt. Ugh. Not my best side either. 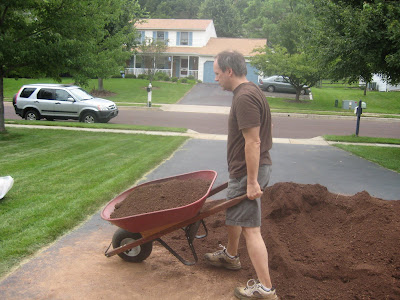 And there is Jay hauling the full wheelbarrow from the driveway to the backyard... 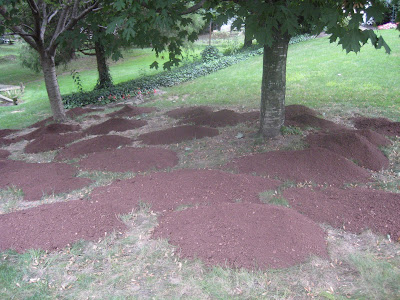 And making his little molehills of dirt everywhere. Why you might ask? Well, you can somewhat see from this photo that we have a steeply sloping backyard. (This is facing the side neighbor's yard - that bank of ivy is not ours). And over time, erosion has done a nasty number on our lawn. So we are bringing in topsoil and planting new seed... trying once again to grow a yard. 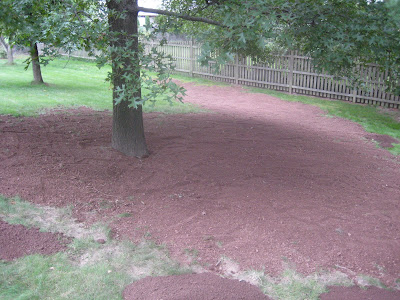 Here's one with the dirt all spread out nice and pretty. This faces the neighbor to the back - our property ends right at the fence. We got started on this project around 11:00 this morning. It is now 8 p.m. and Jay is still outside spreading seed. Me, I got my shower and I'm blogging... it's bug time and NOTHING is important enough to keep me outside at bug time!
Posted by Cheri at 7:30 PM 1 comment:

I don't usually journal on my layouts 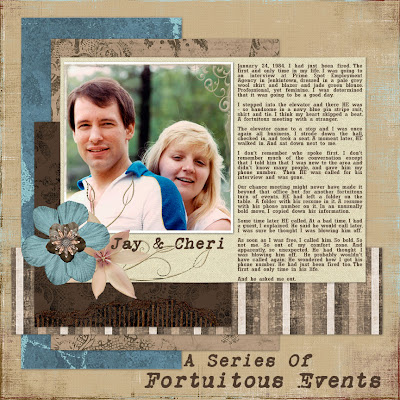 - in fact, I have a bunch of "unfinished" layouts still waiting for some journaling. But here I am taking the class "Telling Stories Deeply" over at Big Picture Scrapbooking (yes, at the same time as "Beautiful Evidence" over at Jessica Sprague, and yes, I am insane!) and being encouraged to tell the stories that only I can tell. Last week I got down some important memories of Sarah's birth. This week I went even a little further back in my history and got down the story of how Jay & I met. {supplies: Pencillines Template 146, JS Kraft Paper, CAZ Denim & Brown Kit at deco-pages.com, VT Remington font}

It is so interesting to me to look back at that moment in time and think that if we hadn't both just lost our jobs, if we hadn't chosen the same employment agency, if our interview times had been off by even fifteen minutes, if one of us had been late, if I hadn't surreptitiously copied down his phone number... then we might never have met, gotten married, had three beautiful children. It's kind of staggering to contemplate.

January 24, 1984. I had just been fired. The first and only time in my life. I was going to an interview at Prime Spot Employment Agency in Jenkintown, dressed in a pale grey wool skirt and blazer and jade green blouse. Professional, yet feminine. I was determined that it was going to be a good day.

I stepped into the elevator and there HE was - so handsome in a navy blue pin stripe suit, shirt and tie. I think my heart skipped a beat. A fortuitous meeting with a stranger.
The elevator came to a stop and I was once again all business. I strode down the hall, checked in, and took a seat. A moment later, HE walked in. And sat down next to me.

I don’t remember who spoke first. I don’t remember much of the conversation except that I told him that I was new to the area and didn’t know many people, and gave him my phone number. Then HE was called for his interview and was gone.

Our chance meeting might never have made it beyond that office but for another fortuitous turn of events. HE had left a folder on the table. A folder with his resume in it. A resume with his phone number on it. In an unusually bold move, I copied down his information.

Some time later HE called. At a bad time. I had a guest, I explained. He said he would call later. I was sure he thought I was blowing him off.

As soon as I was free, I called him. So bold. So not me. So out of my comfort zone. And apparently, so unexpected. He had thought I was blowing him off. He probably wouldn’t have called again. He wondered how I got his phone number. He had just been fired too. The first and only time in his life.

Catching Up on Beautiful Evidence 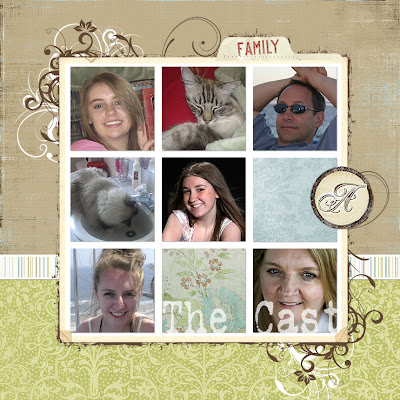 p 9. "The Cast" - this page introduces the characters for the "US" chapter. I'm planning to add duplicates of the "Me" page for each family member. 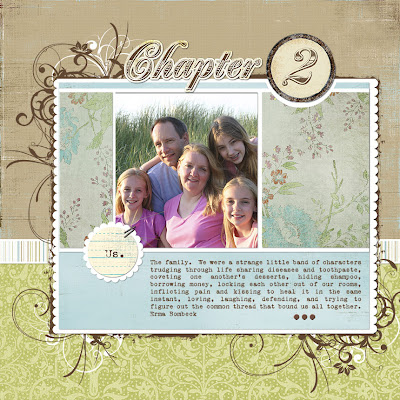 p. 8 - opening of Chapter 2 "Us". JS had names & ages listed on this page. Since I'm using an old photo, I opted for this great Erma Bombeck quote instead. 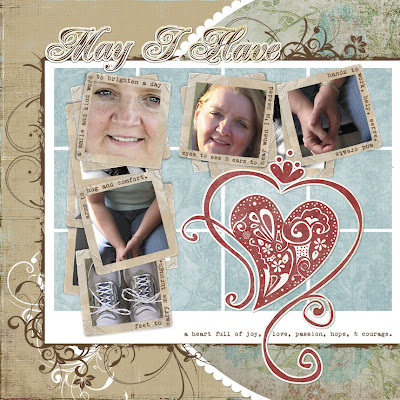 p. 7 "May I Have" - this one may get some reworking. I'm seeing such inspiring pages in the gallery that makes me want to make this page a little more personal. 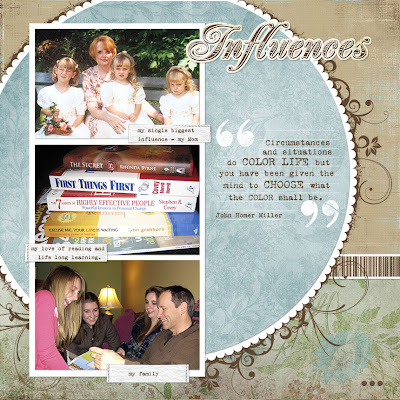 p. 6 "Influences" This page came together pretty easy for me. Although I have many different influences in my life, what really guides me from day to day are the values my Mom instilled in me growing up, my love for and commitment to my family, and my love of learning.