Having successfully retrieved my photos from my re-formatted SD card, I have these to add to my Scavenger Hunt finds: 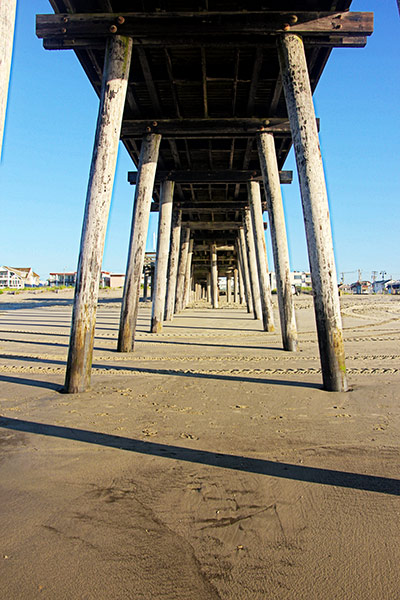 Taken from the underside of the 14th Street fishing pier.  I've shot this before, but always facing the ocean. From a strictly composition perspective, it is a lot more interesting facing toward town. 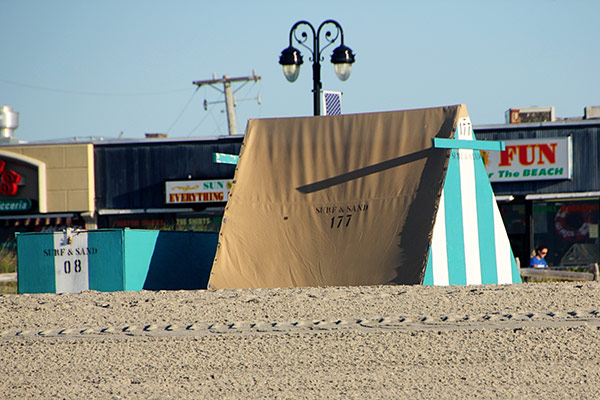 The tents where the umbrellas for beach rental are stored. And the big locked box to the left is where the beach chairs are stored. 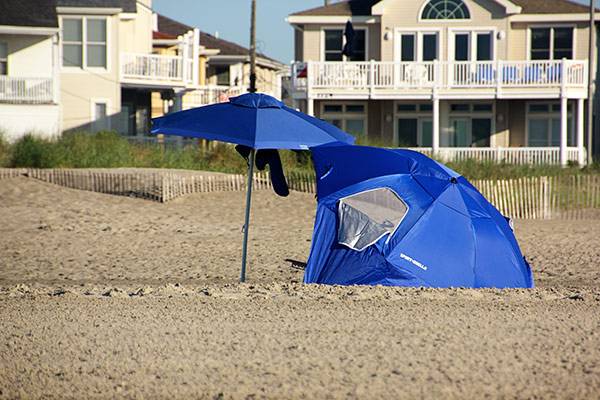 Bring your own shade... 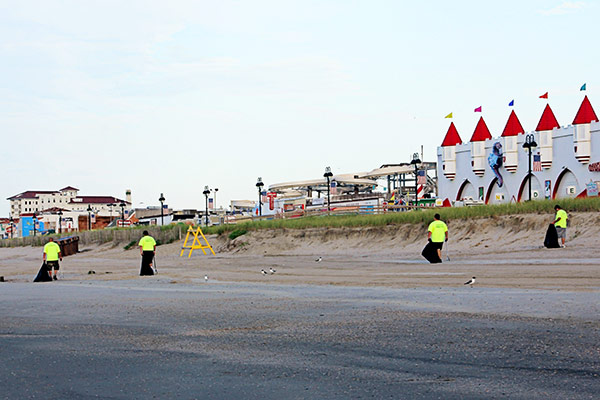 It is always nice to see that our beach tag fees are being put to good use! Not sure if these are paid employees or folks doing community service.  Either way, I love how clean Ocean City beaches are.
Posted by Cheri at 3:57 PM 7 comments:

Public Service Announcement:  I reformat my SD card every time I download photos to my computer. After our trip to Ocean City, I accidentally did the reformat before I had downloaded the photos. I was so angry with myself. All those precious photos gone! Today I decided to google it to see if there was any way to retrieve them - a $39.95 software download from a company called Card Recovery and a few quick steps later - all those precious photos are back!  Just in case any of you ever accidentally reformat your SD card...

On the first morning at Ocean City, Deanna and I were up and out the door by 6:30 a.m., expensive cameras in hand (my Canon 60D, her Nikon), to walk the beach and take photos.  We didn't make it far when a woman called out that if we wanted a good photo opp there was a stingray stranded by the jetty.

First you have to understand that Deanna will tell you she likes animals more than people.  And she's a nurse, so she has a lot of sympathy for injured creatures.  And she's a scuba diver - she has been swimming with sharks and stingrays before. So she was a bit incensed that this woman was suggesting that a stranded fish was a good photo opp.

We walked over to the jetty where 3 or 4 people were milling around getting photos of the stingray and chasing it into even further shallows than it was already in. Nobody was making any attempt to save the poor thing.  We could immediately see that it had been scraped up quite a bit from being buffeted against the rocks. And it had no way to get back to the ocean as the tide had gone out, leaving bits of sand bars where there wasn't enough water for it to get over.

Deanna suggested we start from the other direction and walk behind it to force it back toward the ocean. So Deanna and I started shuffling through shin deep water and the stingray started moving back in the proper direction. Until we hit the first sand bar and the stingray wanted to turn around. The only way to keep it moving in the right direction was to literally push its fins over the sand bar. Deanna was holding the tail so it wouldn't sting. 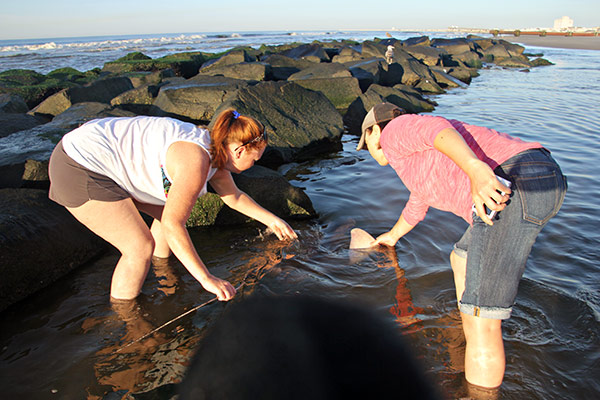 This was at about the half-way point of the jetty and the first area where the water was too shallow to allow forward movement.  After the first few pushes, pink shirt lady jumped in to help (up til then she had just been taking photos). 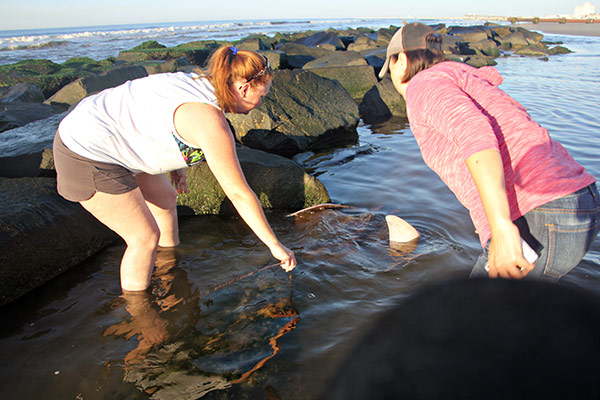 I was juggling two expensive cameras and carrying my flip flops and Deanna's shoes, so I stepped back for a minute to get these shots. 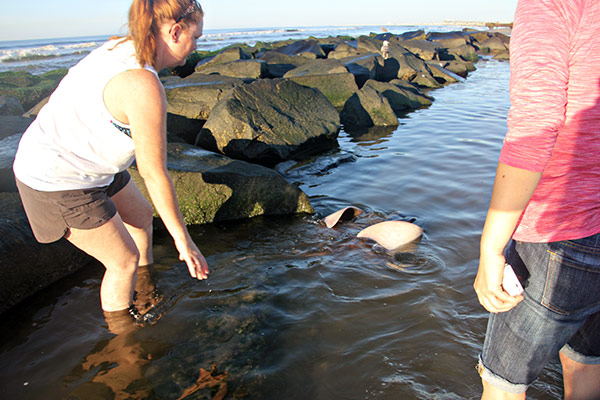 It was at this point that older guy on a bike stops by and says "Are you herding a stingray?"  Well yes, if we don't get it out of these shallows it will die.  And someone behind us says "Aren't you worried about getting stung?"  Um YES, but that is why every time we have to touch it Deanna is holding the tail! 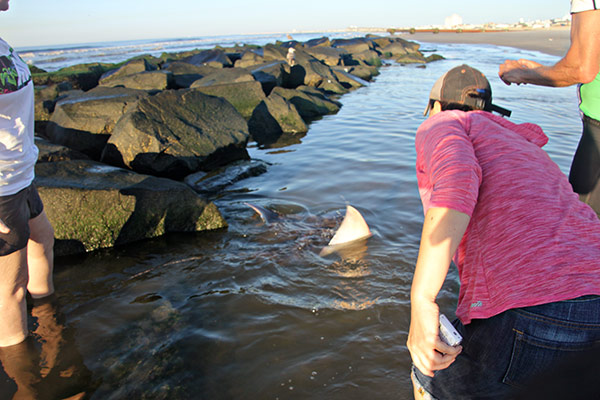 And then bike guy wants to know aren't we worried about the cameras?  Well yes.  But we still want to help this poor creature. You know, priorities.  Once we got past this jutting out rock, pink shirt and bike guy stepped back and Deanna and I continued to herd and lift.  See how far up the next group of sticking out rocks is??? 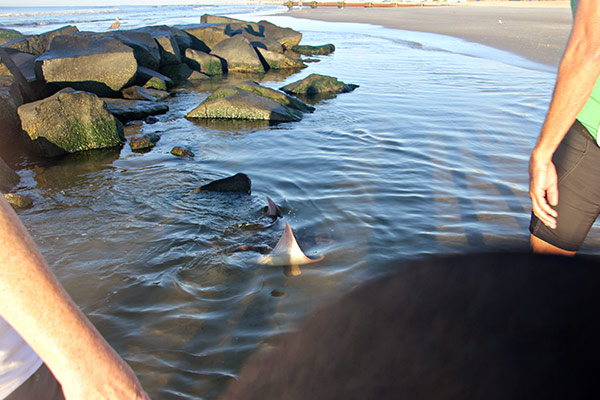 Well, it was when we finally got the sting ray that far that the water was deep enough for it to swim around the end of the jetty and out into the open ocean.  It took awhile before the poor thing was able to swim past the breaking waves. I imagine it was exhausted from being chased around the shallows of the jetty by camera wielding humans.  (I think the blobs in the foreground of several of these photos are my flip flops... too much stuff in my hands!!)

So that is how we began an amazing day at the shore. I actually touched a wild stingray! More than once!
Posted by Cheri at 1:00 PM 7 comments:

I had a really wonderful visit with my sister Deanna July 20-24.  I flew her out here to celebrate her 50th birthday (which was in June but we had to work around her work and kid schedules).  The only thing she asked for was to see the ocean. You don't get much of that living in Tennesee. Needless to say, I was happy to oblige! And Ocean City was a wonderful spot for Scavenger Hunt photos!

We arrived and checked into our bed and breakfast around 3:00 in the afternoon on the 21st.  With only 45 hours for our total visit, we wanted to fit everything in!  As soon as the rain cleared, we headed up to the boardwalk and visited the shops. Stopping in my favorite shop, the first thing we noticed was: 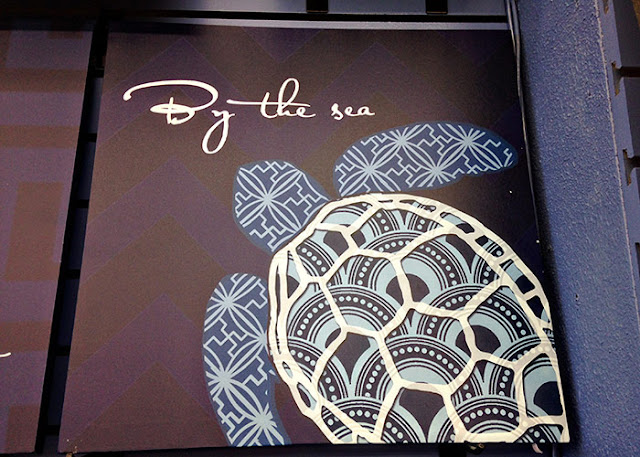 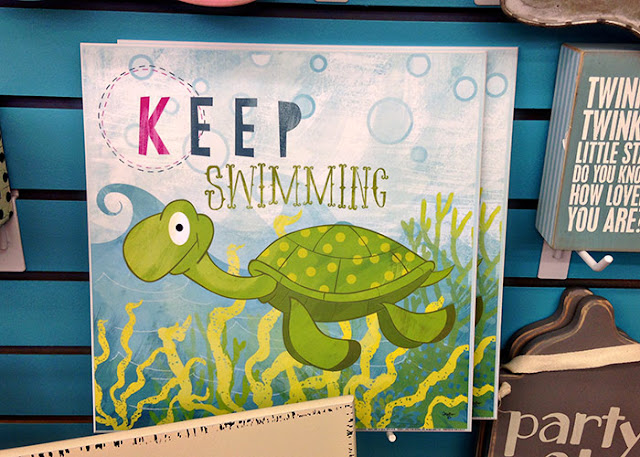 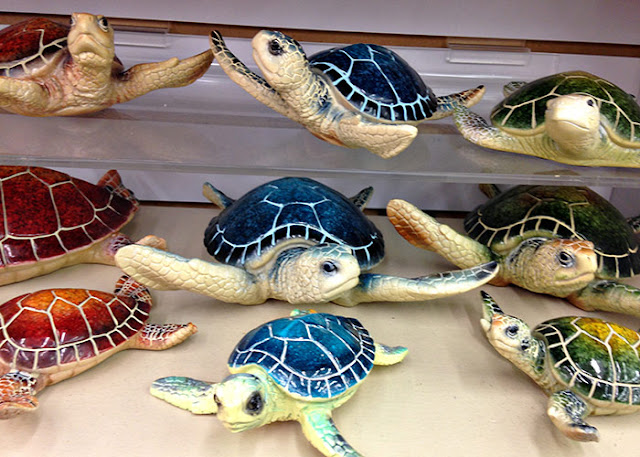 And I thought finding a turtle was going to be hard!

We had dinner at Manco and Manco - the best pizza anywhere! And dessert at Kohr Bros - frozen custard - orange and vanilla twist (think the flavor of the creamsicles you used to get from the ice cream truck as a kid!).  Then we walked down to Wonderland Pier which is one of the small amusement parks on the boardwalk. On the way there we found:

#17 - matching uniforms - a string band from Philadelphia. And by the uniforms, I would guess they are part of the Mummers Parade. 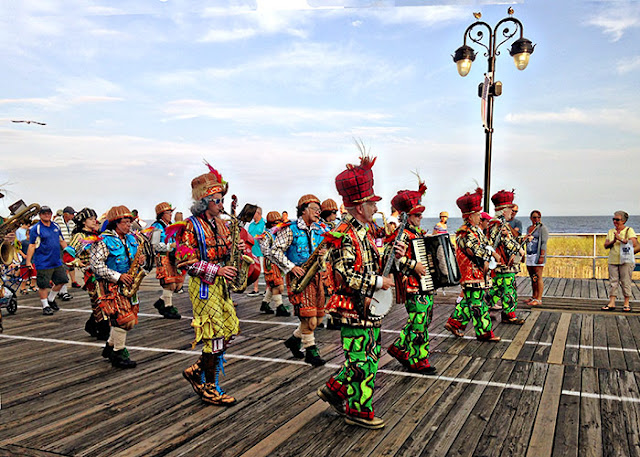 Our first stop at Wonderland Pier was # 19 - a ticket booth: 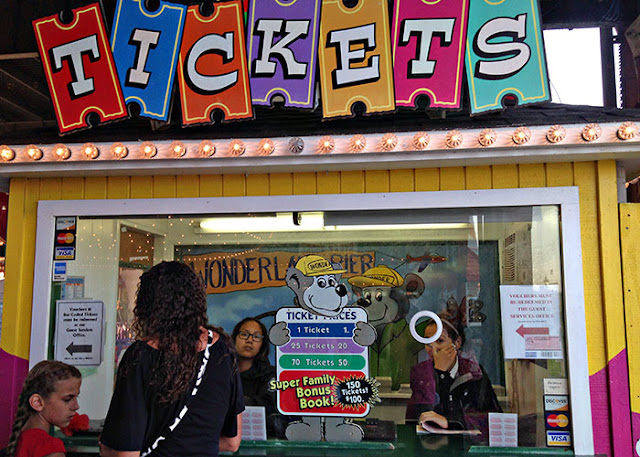 Across from the ticket booth is #13 - a carousel:

But we didn't go on the carousel. We bought tickets for the ferris wheel ($6 each, sheesh!) just so I could get this photo:
#16 a panoramic view from high up 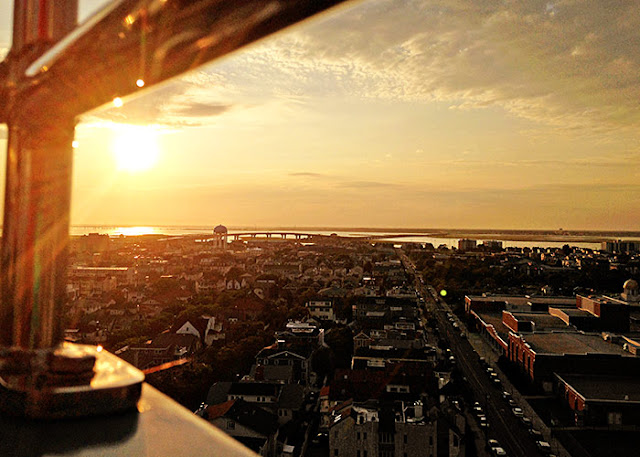 This is a view of the town (island) of Ocean City NJ, facing toward the bay.  You can see the bridge that you cross to come into Ocean City.  The large building to the far right of the photo is the high school grounds. Yes, kids apparently live here year round!  It was just before sunset when we took our ride and the sky was gorgeous. 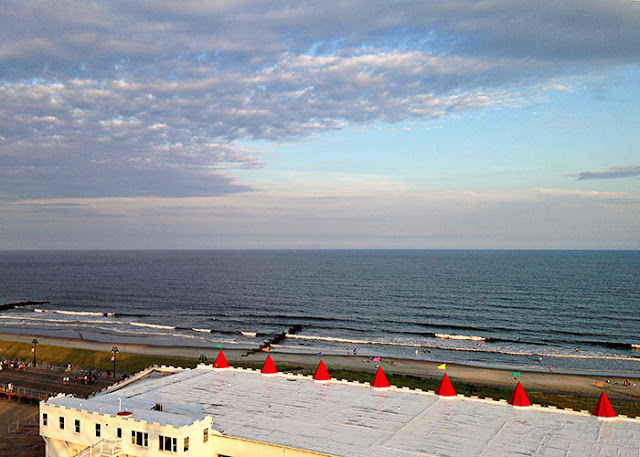 And facing to the other side of the ferris wheel is a view of the boardwalk and the Atlantic Ocean. Also qualifies for #20 - a natural body of water... a very big one!

On our second day, we got up early and walked the beach.  A stingray had gotten stranded on the beach side of a rock jetty when the tide went out and we helped guide it (pushing its wings over the sand bars in the shallows) back out to the ocean.  I had a few really good photos of our rescue, along with shots of architectural columns under the 14th St. fishing pier and a tent on the beach (and waves, and pink toes, and the sunrise).  But when I got home... I accidentally formatted my SD card before downloading my pictures. UGH!!!  At least most of my Scavenger Hunt shots were cell phone shots and not deleted.

Up on the boardwalk again, we captured Alternative B - someone holding an umbrella: 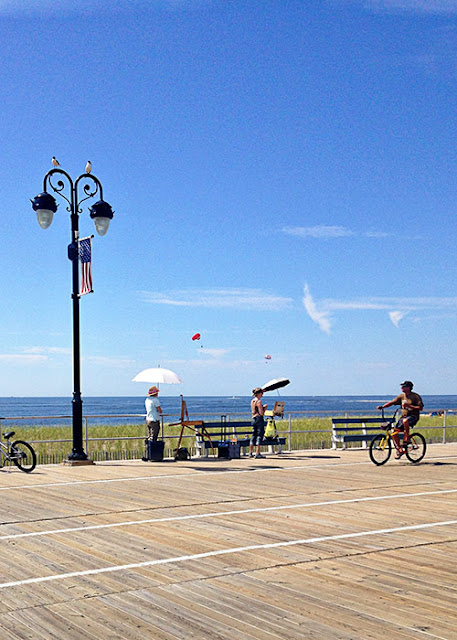 Truthfully, this was two artists setting up to paint and the umbrellas would eventually be fixed on a pole to shade their work.  I was lucky to catch the lady in the white shirt while she had the umbrella in her hands!


Later in the day, we went shopping in town and stumbled upon this:
#15 - a flag pole with at least 3 flags: 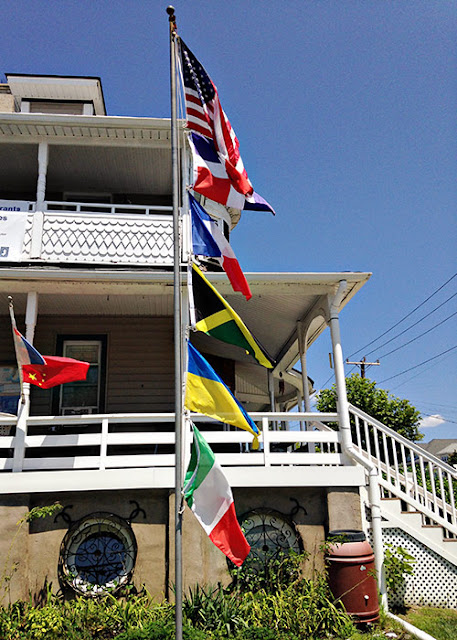 I have Deanna to thank for noticing this. We were on our way to lunch, came to an intersection, and I said "we need to turn left here."  Her response was "We can't" and she physically turned me around to see this.  I could have walked one end of Ocean City to the other and never seen this particular house!

I consider this the find of the trip as I never thought I'd find this one!

Our family vacation to Ocean City is in mid-August and I hope to capture some of the photos I lost then.  Unfortunately, our sting ray rescue mission has been relegated to a sweet memory with no proof.
Posted by Cheri at 1:00 PM 18 comments:

Between illness and travel, I haven't been around much.  But I'm finally feeling better, catching up with my life, and I have my first set of photos for the Scavenger Hunt!

We traveled to Lexington, KY July 7 - 11 to visit Jay's family.  I was sick the entire time.  In fact, this summer cold had me down for two solid weeks. As in zero-energy-can't-breathe-sore-throat-want-to-curl-up-in-bed-for-a-week sick. Not being up to snuff, I didn't have the energy to get photographs and missed several opportunities for a college and structural columns, among other things.  But I did get a few shots in Kentucky. 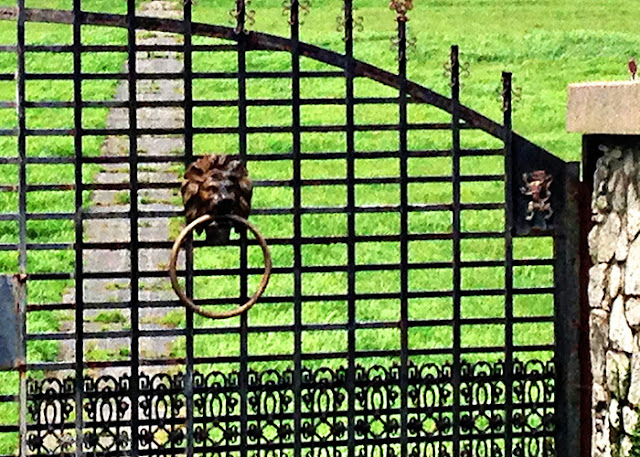 Okay, I suppose technically it might be a gate pull? But it looks like a door knocker to me. And what is really cool is that this knocker belongs to this: 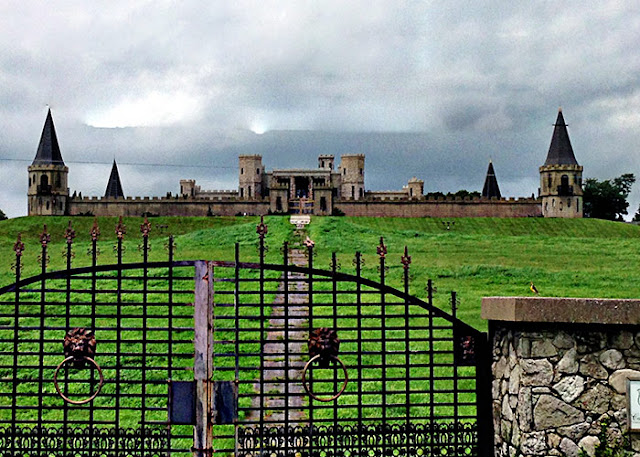 The Castle Post in Versailles KY, just outside of Lexington. It was built in 1969 by the Martin family, so it isn't really old, but designed after old castles in Europe. It is now operated as a luxury bed and breakfast. You can't tell from this photo, but the 4 towers at the corners are just part of the outer fence. The castle really only takes up the very middle of the photo. 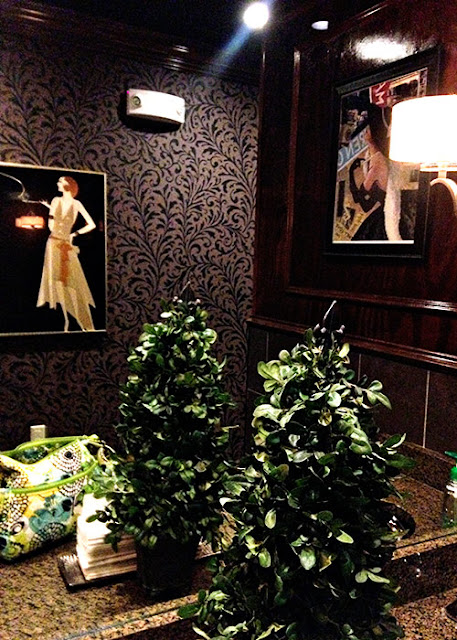 Taken via the mirror inside the ladies room at Hanger's Restaurant in Richmond KY (and carefully angled so as not to be a selfie).  I liked the art work on the walls. 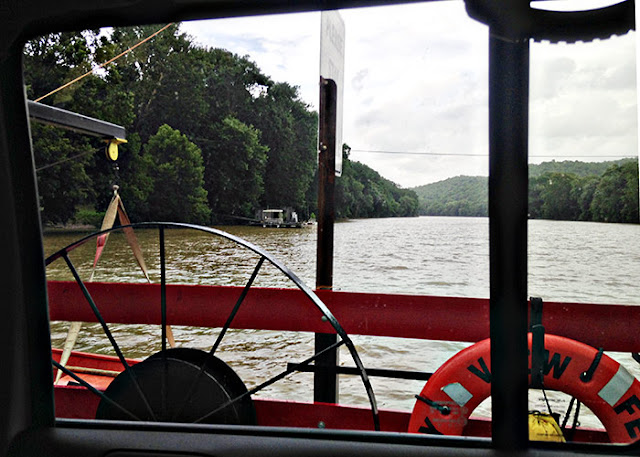 This is the Kentucky River as seen from inside the in-laws Jeep Wrangler while crossing on the Valley View Ferry.  The ferry only fits two cars at once.  It was a rainy day when we were out, so we didn't leave the vehicle for photos on either side.  The ferry was founded in 1780 and is believed to be the oldest continually operating business in Kentucky.

The few other photos I have from Kentucky are of horse farms and don't fit any of the scavenger hunt requirements.  And honestly, I didn't really get anything good.
Posted by Cheri at 6:59 PM 9 comments:

I'm participating in Kristin's Summer of Color Challenge for my third year.I decided this year to do some 3D style mixed-media projects - specifically - altered bottle art.  These were finished timely, but I've been sick (yes, head cold round 2) so I'm very late posting.  And to my regular readers... I'll be offline the rest of this week - traveling to visit the inlaws.

Week 3 - lavender plus violet plus yellow: 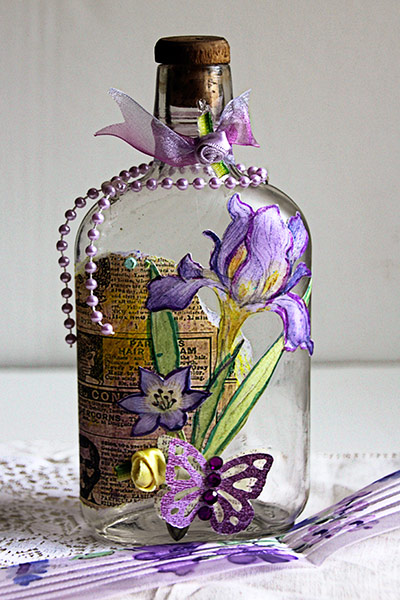 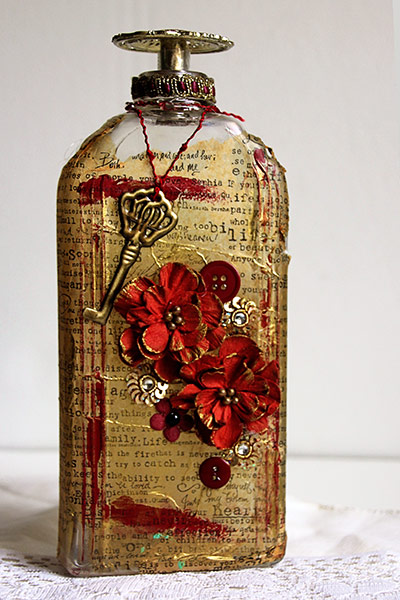 The "lid" is actually a filigree drawer knob, held in place with several rounds of packing tape!  This was originally a vintage cough syrup bottle.  Have to say that this one currently holds second place behind the sea glass one in my heart!
Posted by Cheri at 8:05 PM 13 comments: